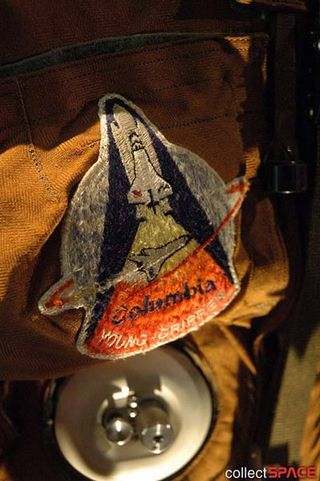 Among the outfit's additions, albeit a minor one, was a4-inch (10-centimeter) embroidered emblemwith their names, their spacecraft's name, and a design that represented theirsoon-to- be record mission.

Crew patches were a tradition that traced back to Young'sfirst spaceflight.

As pilot of Gemini3, he and Virgil "Gus" Grissom were the last to name theirspacecraft (until dual vehicles on Apollo 9 and later flights required thetitles to return). So, to re-personalize the program, Gordon Cooper and PeteConrad as the Gemini 5 crew, designed a patch.

After initial objections by management, the emblem stuck andthe military-borrowed custom of crew (or "Cooper" as they weresometimes called) patches was born at NASA.

By the time Young reached Pad 39A, he had stitched to hisprior spacesuits three patches identifying his Gemini 10, Apollo 10 and Apollo 16 missions (for his rookie pilot, the emblem that Crippenwore that day was his first). For his previous insignias, Young and hiscrewmates sought the inspiration and assistance of NASA's and contractors'artists, as well as his first wife, Barbara. For the shuttle's first missionpatch, Young's advice may have come from above.

Robert McCall, a noted space artist whose works were in theNational Air and Space Museum and on the poster art for the Stanley Kubrickfilm 2001:A Space Odyssey, was working at Johnson Space Center in 1979 when Youngapproached him.

"I was painting that mural in Building 2,"described McCall to collectSPACE of Opening the Space Frontier - The Next GiantStep, a 71-foot long by 16-foot high (21-meter by four-meter) mural thatfeatures the progression from Mercury to Space Shuttle, including the STS-1commander as the central figure. "It was in the early days of working onit, [that] I was asked by John Young to design the STS-1 mission emblem andeagerly consented to do that."

This wasn't McCall's first patch. He had previously beenasked to design the insignia for the Apollo 17mission.

"I loved that opportunity by the way," saysMcCall. "It is something I continue to covet because it was wonderful toreally see this emblem that I designed on the Moon, in real time from MissionControl."

Nor was McCall's experience limited to the Apollo andearlier U.S. programs. In addition to working on the JSC mural, McCallhad seen a shuttle firsthand even before the first launch.

"I had seen the rollout of the Enterpriseat Edwards, California, Dryden Flight Research Center area, so I knew the SpaceShuttle, said McCall, "and of course [from] pictures and schematics and drawings and architectural drawings and so forth. So I was very well acquainted with the shuttle before that first mission occurred and before I designed this mission emblem."

"It was a fascination for me, as all things having todo with our space program have been through the years."

As soon as he "knew the mission," McCall beganputting pencil to paper, and paper and paper.

McCall however, wasn't the only one with ideas.

"John Young pretty much designed [the emblem],"said McCall. "That is, he gave me a rough pencil outline of some of theelements that he thought should be part of it and then I made sketchesincluding those elements that were important to him and Bob Crippen."

"Then I made a very comprehensive sketch that both Johnand Bob approved of and then I proceeded to make a painting."

"The sphere of the Earth is in the background andoverlaying that sphere is a rough triangle. At its apex is the shuttle, risingand then tanks are firing. There is another rough triangle of brilliant colorfrom yellow to red, symbolizing the blast of the engines.

Within that red is the word 'Columbia' and then below that'Young' and 'Crippen', the crew members. There is an orbital disc,or an orbital oval that surrounds the Earth in the background and a shuttleright immediately beneath the [launching] Space Shuttle, a small shuttle,showing the orbit of that shuttle around the Earth," described McCall.

"I think it is one of the better mission emblems that Ihave designed."

McCall and his wife Louise attended the launch of STS-1 andwere with Young's second wife Susy just a few days before.

"[Susy] was very nervous about it all, as we all were,because it was the first flight and there was no subtle approach to learningthe characteristics of the shuttle," explained McCall. "It had to beflown full power from the first moment unlike an experimental aircraft whichyou can kind of ease into: you taxi it, you have taxi tests, low performance[flights] and finally you test it fully. The shuttle being very different, ithad to be flown immediately from the launch pad. So, everyone was nervous aboutit and they had reason to be as we've learned since."

But the worry had been for naught, and STS-1 with Young andCrippen at the controls landed safely on April 14. One month later, the crewand McCall were back in Florida to debut a new set of stamps designed by theartist.

"[The stamps] were designed and painted, the actualartwork was done for the U.S. Postal Service before that first mission becausethe stamps were issued at a programmed event at Cape Kennedy, in the vicinitythe building where the shuttle was then taken after it landed and was flownback to the East Coast," said McCall. "Louise and I were present when John andBob were viewing the space shuttle after it landed and they were part of theceremony of the issuance of that stamp. Actually, it is a series of eightstamps, all connected."

And what did Young think of McCall's design? Despite theartist giving credit to the astronaut, Young disagreed.

"Bob McCall designed the patch. He's a great fellow. Hereally does good work on the patches," Young said in an interview withcollectSPACE.

For McCall, the privilege was all his.

"It was an important time in my life. I've had a lot ofwhat I regard as important times, but this was significant and special,"said McCall.

The preceding was part two of a special three-part collectSPACEseries celebrating the 25th anniversary of STS-1, the first Space Shuttleflight. To read part one, an original interview with the STS-1 crew, click here. Thethird installment, concerning the artifacts that remain from STS-1, will bepublished on the anniversary, April 12, 2006 here.