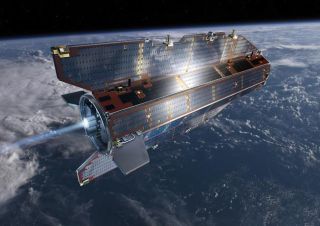 An artist's interpretation of the GOCE satellite in orbit.
(Image: © ESA/D.Ducros.)

A gravity-mapping European satellite nearing the end of its fuel supply will make an uncontrolled plunge back to Earth, likely in October, according to AFP.

The Gravity Field and Steady-State Ocean Circulation Explorer, called GOCE for short, was launched by the European Space Agency (ESA) in 2009. The sleek 17.2-foot (5.3-meter) spacecraft has been in a very low orbit at 160 miles (260 kilometers) above Earth, a the electric propulsion system keeping the vehicle aloft will stop working sometime between late September and early November, ESA's mission manager told AFP.

Most of the satellite will burn up in the atmosphere, but a quarter of it reportedly will survive the fiery reentry. An estimated 40 to 50 fragments of the spacecraft, weighing a total of about 550 pounds (250 kilograms), are expected to scatter a trail of debris over the planet, ESA officials told AFP. Though mission controllers cannot yet predict where the pieces of the satellite will land, they stressed GOCE is very small compared to other spacecraft that have made uncontrolled reentries and added that they will be advising national authorities about the upcoming plunge.

During its successful mission, GOCE mapped the globe's ocean currents and lumpy gravitational field in unprecedented detail. Its sensitive instruments also helped scientists track the flow of lava underground and produced the first high-resolution map of the hard-to-study boundary between Earth's crust and mantle.