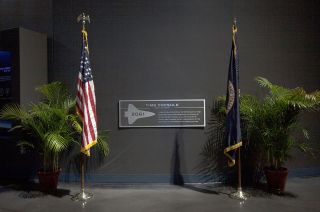 At the Kennedy Space Center Visitor Complex in Florida, a space shuttle program time capsule has been installed in a vault within the Space Shuttle Atlantis exhibit.
(Image: © NASA/Jim Grossmann)

NASA's Florida visitor center has dedicated a time capsule filled with memorabilia related to the 30-year space shuttle program. Not to be opened until 2061 — 50 years after the last shuttle mission — the time capsule was sealed in the wall of the building that displays the spacecraft that completed that historic final flight.

A public ceremony to dedicate the time capsule was held Monday (Sept. 9) in the "Space Shuttle Atlantis" exhibit at the NASA's Kennedy Space Center Visitor Complex. The five-story-tall facility displays the retired orbiter and more than 60 related artifacts and simulators designed to inspire a new generation of space program workers.

The $100 million exhibit opened to the public in June. [See Photos of the New Space Shuttle Atlantis Exhibit]

The contents of the time capsule were chosen to explain to those who open it in 2061 the significance of the shuttle program through the perspective of what it meant to work at the Kennedy Space Center during the time the orbiters flew.

The first space shuttle, Columbia, lifted off April 12, 1981. The last, Atlantis, landed July 21, 2011. In between those milestones, 133 missions retrieved, repaired and deployed satellites, launched probes to other planets, serviced the Hubble Space Telescope and built the International Space Station.

Among the memorabilia inside the time capsule are:

Other items that were placed inside the capsule included an employee's ID lanyard; the center's annual report from 2010; photos of the Launch Complex 39 area, from where the shuttle was processed and launched, as it appeared in 1981 and 2011; and NASA pamphlets describing Kennedy as "America's Spaceport."

Kennedy Space Center director Bob Cabana, who flew on four space shuttle missions, said the time capsule was as much about the future as it was the past.

"As important as our past was, our future is what it's all about," Cabana remarked during the dedication ceremony, as reported by Florida Today. "Just imagine where we're going to be 50 years from now?"

Based on its current plans, NASA hopes by 2061 to have launched astronauts to explore an asteroid and to have crews orbiting Mars, if not also by then on their way to the surface of the red planet. If schedules hold, the opening of the capsule will also come more than four decades after the first commercially-built spacecraft delivers astronauts to the International Space Station.

In August 2011 at a "We Made History" celebration held at the Kennedy Space Center, 426 young "Space Exploration Ambassadors" were nominated to be at the time capsule's opening 50 years later. Patrick Sullivan, who was chosen as one of the ambassadors, attended Monday's dedication ceremony to speak about the history of the space shuttle program and the future of space exploration.