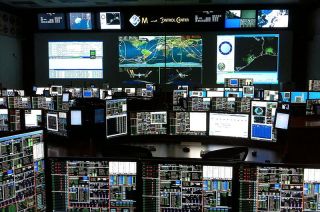 HOUSTON — NASA's Mission Control is gaining a new "look and feel," trading the "big blue consoles" that were iconic during the space shuttle program for upgraded "clean" workstations.

The extensive improvements, which are now being tested in what was the flight control room (FCR) for the shuttles' final missions, are to prepare the Christopher C. Kraft, Jr. Mission Control Center (MCC) at NASA's Johnson Space Center in Houston for the space agency's next-generation spacecraft and missions.

"The control center itself is in a big evolutionary process where we are moving from the current architecture, which everybody is familiar with ... into what we are calling MCC-21 or 21st Century Control Center," William Foster, ground control officer in Mission Control, said in a recent NASA interview.

The MCC-21 flight control room retains the general front-screen, rows-of-desks layout that the public has come to expect from Mission Control, but with a decidedly-different decor. [Photo Tour: NASA's Johnson Space Center Up Close]

"It's a different look," described NASA public affairs officer Josh Byerly. "It has a different sort of feel to it."

"It takes some getting used to," said Foster.

NASA's Mission Control Center (MCC), housed in Building 30 at the Johnson Space Center, is comprised of several flight control rooms, including FCR-1, FCR-2 and the Red, White and Blue FCRs.

"When the building opened up, these were [referred to as] MOCRs — Mission Operations Control Rooms," explained Foster. "After the first four shuttle flights, the decision was made we're no longer running missions, these were more flights, which is why we changed the name to FCR."

FCR-1 (pronounced "ficker-one") is an Apollo-legacy room upgraded to support the International Space Station (ISS). FCR-2 was retired and has been preserved to display its historical Apollo configuration. Red FCR is a training room and Blue FCR was previously used for the space station before the program moved into FCR-1 in 2006.

White FCR first went into use for the shuttle in 1995. The following year, beginning with shuttle Endeavour's mission STS-77, all the remaining flights were supported from that room.

On July 21, 2011, hours after Atlantis landed, completing the 135th and final space shuttle mission, White FCR was shut down.

"The work done in this room and in this building will never again be duplicated," flight director Tony Ceccacci told his ground control team before signing off for the last time. "I believe the accomplishments of the shuttle program will become the next set of 'shoulder of giants' for the future programs to stand on."

Work to transform the White FCR from its shuttle legacy configuration into the new MCC-21 began in January this year. By March, the room had been completely emptied of its blue consoles and the walls had been repainted.

"They took all the plaques down and then put them back up," Foster said, referring to the mission emblem plaques that symbolized the missions that were "flown" out of that room. The insignias are traditionally hung after each flight and line the upper walls in each of the FCRs.

"We do like to keep a history of what was supported out of the room," Foster said.

Unlike some of the other, older FCRs where rear projection screens are used for the large displays at the front of the room, the White FCR uses a single screen with three front projectors mounted from the ceiling.

The new MCC-21 screen is still projected from the front, but encompasses more of the wall, leaving less space for the room's prior adornments.

"The screen got wider," Foster said. "In the [shuttle] White FCR, we had room on either side of the screen for [U.S. and NASA] flags to go up. Now they are going back up on poles."

The widescreen at the front of the room is matched by the expanded use of flat panel displays at each of the wood-panel workstations.

"We have all the displays up," Foster said, "[though] most of the displays...are not functional yet. We're still starting to populate that with the new capabilities."

"On Tuesday (Aug. 27), we ran [the displays] for the first time with the upgraded training system simulator," Foster said. "That was very successful — able to command, able to get data in."

The MCC-21-upgraded White FCR is ultimately intended to serve as the mission control for future flights of NASA's Orion multi-purpose crew vehicle on missions beyond low Earth orbit. First though, it will serve as a temporary flight control room for the International Space Station (ISS).

"If things go as planned, then sometime in June or July of next year, 2014, the ISS support will move out of [FCR-1] down the hall to the White FCR, the shuttle control room," Foster explained.

The move will make way for FCR-1 to get its own MCC-21 transformation.

"It will end up looking very much like [White FCR]," Foster said.

The space station's previous control room, Blue FCR, has already undergone the upgrade. It is being prepared for the Orion capsule's first mission, the Exploration Flight Test-1 (EFT-1), scheduled to launch in September 2014.

"Orion will eventually fly off of theSpace Launch System, NASA's new heavy-lifter," Foster explained. "But for this first mission, it is going to go off a Delta IV [Heavy] out of Cape Canaveral."

"It will not have humans onboard, but will do two orbits of the Earth, the second orbit going up to a high altitude of close to 4,000 miles [6440 kilometers] so when it re-enters [the Earth's atmosphere], it will re-enter close to the speed you would enter if you were coming back from the moon or way out there," he said.

Future missions of Orion are envisioned to fly astronauts to explore an asteroid and eventually visit Mars, hence the needed upgrades to Mission Control.

"The story of this building has changed from the original days, through the mid-nineties to now — and this won't be the last one," Foster remarked. "The evolution [of Mission Control] will continue as technology improves."