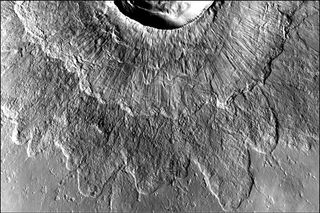 An example of a "double-layer" ejecta crater on Mars.
(Image: © NASA)

Scientists are a step closer to solving a 40-year-old mystery about some unusual looking craters on Mars.

These features are called double-layered ejecta (DLE) craters, and attracted research attention because their debris patterns do not match the typical understanding of how craters are formed.

Craters are pockmarks that form on the surface of a planet or moon when a high-speed rock smashes into the surface. The fast-moving collision sprays out dirt and other debris in a ring. There are more than 600 craters on Mars that have two layers of this debris, however. A new study suggests a glacial landslide would have created the second layer. [7 Biggest Mysteries of Mars]

The study by Brown University geology researchers David Weiss and James Head is detailed in the Aug. 7 edition of the journal Geophysical Research Letters.

The first DLEs came into view during NASA's Viking missions to Mars in the 1970s. The twin spacecraft each carried an orbiter and a lander. While the landers made the first footfalls on Mars, the orbiters remained above for years and mapped much of the planet with their cameras.

In the decades since, scientists then uncovered extensive evidence that water and ice covered much of Mars in the distant past.

The only large deposits of ice on the Red Planet today are at the north and south poles, although icy traces linger in other areas. The DLEs, however, were formed while the Martian surface was covered by a huge sheet of glacial ice, the researchers concluded after examining past climactic studies.

At maximum, this ice sheet reached to the mid-latitudes of Mars and was about 165 feet (50 meters) thick. Ice is slippery, meaning that once the crater was formed and the debris sprayed out, the dirt slid and formed a second layer on top of the first.

The theory matches up with more detailed observations of DLEs, the authors said. Many of the studied craters have radial striations, or grooves radiating from the crater's epicenter. These are common in Earth landslides, particularly those that take place on glaciers.

Steep slopes are also required to make the scenario work. The scientists calculated that the craters must be smaller than 15.5 miles (25 kilometers) in diameter to form DLEs because anything larger would have too shallow a slope. They next examined hundreds of DLEs on Mars and discovered that almost every one surveyed is that size or smaller.

DLEs also exhibit few secondary craters, which happen after thicker parts of the debris carve gouges in the surface. Because these ejecta would have landed on ice, these features would have vanished after the ice melted.