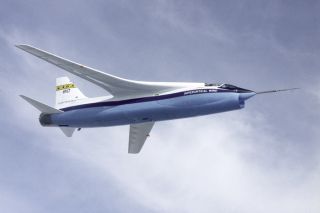 The Vought F-8A, dubbed the TF-8A, was used in 1973 to test the experimental Supercritical Wing airfoil, sh
(Image: © NASA.)

In this historical photo from the U.S. space agency, a Vought F-8A Crusader was selected by NASA as the testbed aircraft (designated TF-8A) to install an experimental Supercritical Wing in place of the conventional wing.

The unique design of the Supercritical Wing reduces the effect of shock waves on the upper surface near Mach 1, which in turn reduces drag. In this photograph a Vought F-8A Crusader is shown being used as a flying testbed for an experimental Supercritical Wing airfoil. The smooth fairing of the fiberglass glove with the wing is illustrated in this March 23, 1973 view.