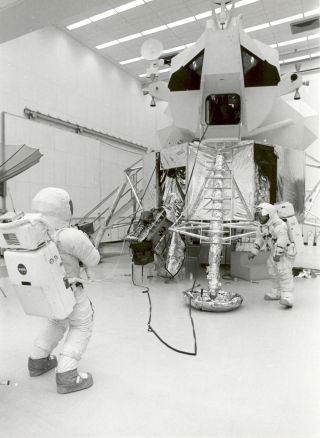 Apollo 13 astronauts practice their moonwalk in February of 1970 at the Kennedy Space Center before the lunar mission.
(Image: © NASA.)

In this historical photo from the U.S. space agency, Apollo 13 astronauts James A. Lovell and Fred W. Haise, Jr., are shown during practice moonwalk at Kennedy Space Center on Feb. 3, 1970. Lovell (right) operates Lunar Equipment conveyor, a pulley arrangement to load and unload equipment from the cabin section of Lunar Module.

Apollo 13's original target on the Moon was the Fra Mauro region, southeast of the Ocean of Storms, to perform an inspection, survey, and sampling of the lunar surface, as well as to deploy and activate the ALSEP package, obtain photographs of candidate exploration sites and to develop human capability to work in the lunar environment. This mission drastically changed after an explosion of one of the oxygen tanks in the Service Module forced the Apollo 13 crew to abort the lunar landing mission and return to Earth.