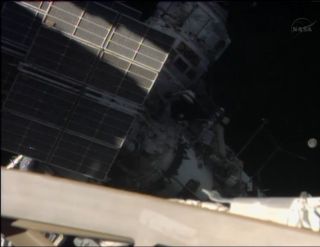 Russian cosmonauts Fyodor Yurchikhin and Alexander Misurkin (center right) work outside the International Space Station on Aug. 22, 2013 after beginning a planned six-hour spacewalk as the moon shines overhead on the right side of this view.
(Image: © NASA TV)

Two Russian cosmonauts living on the International Space Station are taking their second spacewalk in less than a week today (Aug. 22) and you can watch the action live online.

Cosmonauts Fyodor Yurchikhin and Alexander Misurkin will spend six hours working outside the space station to install move experiments and install new gear. The excursion comes six days after a Aug. 16 spacewalk by the cosmonauts that lasted nearly seven and a half hours and set a new record for the longest Russian spacewalk in history.

You can watch today's spacewalk live on SPACE.com here, courtesy of NASA TV. Cameras mounted on the spacesuit helmets of both cosmonauts are capturing amazing views of Earth and space.

Today's spacewalk began at 7:34 a.m. EDT (1134 GMT). It is the eighth career spacewalk for Yurchikhin and the third for Misurkin.

Yurchikhin and Misurkin have several main goals for today's spacewalk. The cosmonauts plan to replace a laser communications system on the station's exterior with mount for a new optical telescope. They will also move a foot restraint and inspect antenna sites on the Russian side of the station to find the source of a loose antenna cover that was seen floating away from the orbiting lab earlier this week.

Today's spacewalk is the 173rd dedicated to space station maintenance and construction. It is the fifth of five spacewalks planned for the current Expedition 36 crew, and the second since NASA aborted a spacewalk in U.S. spacesuits when Parmitano reported a major water leak inside his helmet. Yurchikhin and Misurkin are wearing Russian-built Orlan spacesuits for today's spacewalk, and have reported no issues with the gear.

Rotating crews of cosmonauts and astronauts have been living on the International Space Station continuously since 2001. The station is overseen by five international space agencies representing the United States, Russia, Europe, Canada and Japan. Construction of the space station began in 1998.