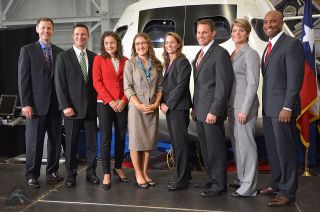 Becoming an astronaut is one of the most difficult careers to achieve: The eight new astronaut candidates recently selected by NASA had to endure rigorous checks into their science, engineering and flight experience, as well as exhaustive medical and fitness tests and other hurdles.

But one requirement for the new recruits may surprise you — poetry.

When asked what type of essay questions were required during the astronaut application process, new NASA recruit Victor J. Glover, a 37-year-old lieutenant commander in the U.S. Navy, responded:

"There was a lot of writing involved. The one that stands out the most is, we were asked to compose a tweet, a limerick, or a haiku. I believe I did a limerick, and it goes:

'Eyes fixed, gazing off into space
My mind in awe of the human race
This is all dizzying to me
Because I gave so much blood and pee
Happy to be here, vice the colonoscopy place."

"And that is funny if you had to go through this interview process, specifically the medical testing," Glover added after reciting his limerick.

Glover's impressive resume is typical of the eight individuals chosen to join the ranks of NASA's illustrious astronaut corps. But while the world is familiar with the rigorous technical qualifications required, Glover's limerick story offers a rare look into the more personal and subjective qualifications necessary to become an astronaut.

The other seven new astronaut candidates are Josh A. Cassada, Tyler N. "Nick" Hague, Christina M. Hammock, Nicole Aunapu Mann, Anne C. McClain, Andrew R. Morgan and Jessica U. Meir. The new crew was chosen from among more than 6,000 applicants — the second largest astronaut application pool ever. The 2013 astronaut class also has the highest ratio of female space travelers to male ones in NASA's history.

The rookies said they were "humbled," "honored," and "excited" to become astronauts, and were ready and willing to travel wherever NASA decides to send them — be it the International Space Station, the moon, Mars, or a nearby asteroid.

"I'm just humbled to be a part of this group," Hague said. "This has been a lifelong dream of mine."

The team is now beginning an intense two-year training program at Johnson Space Center, and won't have another opportunity to speak to the press or public in an official capacity until they've completed training, officials said.