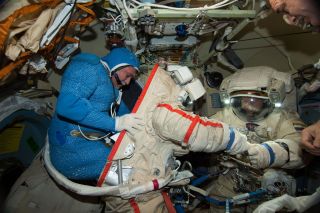 Russian cosmonauts Fyodor Yurchikhin (left) and Alexander Misurkin practice donning their spacesuits for a June 24, 2013 spacewalk outside the International Space Station. They will venture outside the station again on Aug. 16 and Aug. 22.
(Image: © NASA)

Two cosmonauts will venture outside the International Space Station today (Aug. 16) to help prepare the orbiting outpost for the arrival of a new Russian laboratory, and you can watch the action in orbit live online.

Cosmonauts Fyodor Yurchikhin and Alexander Misurkin are expected to spend about six and a half hours spacewalking outside the space station to install power and Ethernet cables on the orbiting lab's Russian segment. The cables will route power and data for Russia’s new "Nauka" Multipurpose Laboratory Module, which is slated to launch toward the International Space Station atop a Russian Proton rocket in upcoming months.

Today's spacewalk is slated to begin at 10:40 a.m. EDT (1440 GMT) when Yurchikhin and Misrukin open the outer airlock hatch on the station’s Earth-facing Pirs docking compartment. You can watch the Russian spacewalk live on SPACE.com here, courtesy of NASA, beginning at 10 a.m. EDT (1400 GMT).

Yurchikhin and Misurkin will wear bulky Russian Orlan spacesuits during their spacewalk. The cosmonauts also plan to install a new set of experiments on the station's exterior to study the effects of weightlessness in low-Earth orbit. It will be the seventh career spacewalk for Yurchikhin and second excursion for Misurkin.

Today's spacewalk is the first of two spacewalks by Yurchikhin and Misurkin in August, and the second dedicated to installing cables for the new Nauka Multipurpose Laboratory (its name means "Science" in Russian). The two cosmonauts began the cable work during a June spacewalk, and will venture outside the space station again on Aug. 22 to perform more maintenance work in orbit.

The spacewalk today will mark the 172nd dedicated to space station construction and maintenance since assembly began on the orbiting lab in 1998. The space station is the largest human-built object in space and is overseen by NASA, Russia and the space agencies of Europe, Canada and Japan. Altogether, 15 different countries work together to the space station project.

While Yurchikhin Misurkin work outside, four other crewmembers will watch over their work from inside the space station. NASA astronauts Chris Cassidy and Karen Nyberg, cosmonaut Pavel Vinogradov and Italian astronaut Luca Parmitano are those who will remain inside. Together, the six spaceflyers make up the space station's Expedition 36 crew.

Rotating crews of astronauts and cosmonauts have lived aboard the International Space Station continuously since 2000.