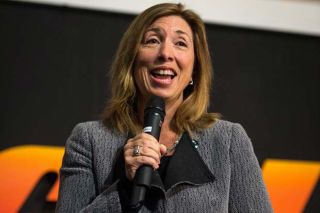 Garver informed colleagues of her decision in an Aug. 5 email. "After quite an extensive decision process, I have decided to make a career change. I will be resigning from my position as NASA Deputy Administrator, effective September 6 and have accepted a new position in the private sector outside the space industry," Garver wrote. "NASA will be sending out a formal announcement tomorrow with all the details. It has been great working with you all these years and I’m sure that our paths will continue to cross."

In NASA's official announcement, agency chief Charlie Bolden described Garver as a great leader and a role model for girls who are interested in science, technology and engineering. [Women in Space: A Gallery of Firsts]

"I have had the pleasure and honor of working side by side with Lori for the past four years, as we sought to position the agency for 21st century spaceflight, scientific discovery and deep space exploration," Bolden said in a statement. "She has been an indispensable partner in our efforts to keep NASA on a trajectory of progress and innovation. In a time of great change and challenge, she has been a remarkable leader who has consistently shown great vision and commitment to NASA and the aerospace industry."

"Lori will always be a great friend to me and to our agency," Bolden concluded.

Garver, who has served as NASA’s No. 2 official since July 2009, has spent most of her career working on space policy. She came to Washington in 1983 to work for then-U.S. Sen. John Glenn (D-Ohio), the first American astronaut to orbit the Earth. After Glenn’s failed 1984 presidential bid, Garver went to work for the National Space Society, rising to executive director, a job she held until joining NASA in 1996 as a policy adviser to then-NASA Administrator Daniel Goldin.

After George W. Bush took office in 2001, Garver left NASA for the private sector, advising Lockheed Martin, Northrop Grumman and the Planetary Society, among others, as a vice president at the Washington-based consulting firm DFI International (since renamed Avascent Group).

President Obama nominated Garver and NASA Administrator Charles Bolden as a package in May 2009. A joint confirmation hearing before the Senate Commerce, Science and Transportation Committee followed on July 8.

Nine days later, Garver and Bolden were sworn in together in a low-key ceremony at NASA headquarters here.

"It will be years before it is known what Lori did to help hold the ship of NASA together and point it away from the past," longtime space entrepreneur Dennis Wingo commented on NASAWatch.com, which first reported that Garver will be stepping down.