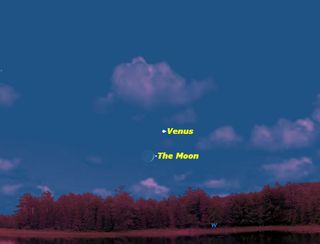 What’s that “star” next to the moon? Over the course of the next month, the moon will pass close to three bright “stars,” which are actually planets, starting with Venus on Friday August 9.
(Image: © Starry Night Software)

The moon has several close encounters with celestial objects this month, and if you witness one, it may make you ask, "What’s that bright 'star' next to the moon?"

This month, the moon will pass close to three of the brightest planets: Venus, Saturn, and Jupiter. Weather permitting, the celestial events could appear as striking night sky views.

Here's why: As the moon moves around the Earth in its orbit, it appears to pass close by many more distant objects in the night sky. Because the moon is nearby and in full sunlight, its light often swamps the objects close to it. Only a few objects are bright enough to show up when close to the moon. [Best Night Sky Events of August 2013 (Sky Maps)]

The brightest objects in the sky, other than the sun and moon, are the planets. They follow the same path across the sky as the moon, called the ecliptic because that's where eclipses take place. So, encounters between the moon and planets are very common.

In August, stargazers can catch a series of lunar encounters with planets, but you will want to plan your night sky viewing.

First up is Venus, this Friday (Aug. 9) just after sunset. Because the ecliptic makes a very shallow angle with the horizon at this time of year, both Venus and the moon will appear low in the southwestern sky, so make sure you have a clear low horizon in this direction. The moon will be only three days old, so will present a very narrow crescent. Be sure to look for "the old moon in the new moon's arms" — a sight that refers to the full disk of the moon lit by the ghostly light reflected from the Earth, known as earthshine.

Three nights later, on Monday (Aug. 12), the moon will have moved on so that it is framed between the planet Saturn, to the left, and the bright star Spica, to the right. If you have a telescope, take a good look at Saturn, as it will soon be vanishing behind the sun.

The moon's final encounter for the month won't be until the morning of Saturday, Aug. 31. On that morning, early risers will be treated to the waning crescent moon just to the right of the planet Jupiter.

With the moon near three different bright planets over a span of a few weeks, it is easy to see how some people, who just happened to look at the moon on these three nights, would be convinced that there is always a "star" next to the moon. In reality, the moon is passing close to three different bright objects located far apart in the sky.

Editor's note: If you snap a dazzling photo of the moon near the planets Venus, Saturn or Jupiter — or any other night sky sight — and would like to share it with SPACE.com for a possible story or photo gallery, please send images and comments, including name and equipment used, to managing editor Tariq Malik at: spacephotos@space.com.