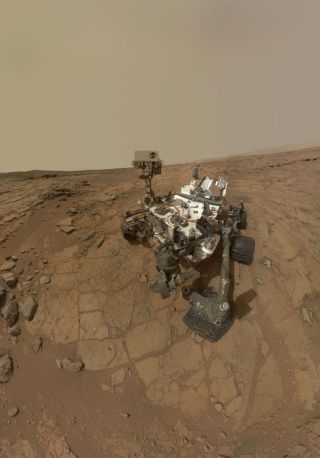 NASA's Curiosity Mars rover is on the prowl, armed with a suite of instruments that can help gauge the habitability of the Red Planet — today, for microbes, and tomorrow, for human explorers.
(Image: © NASA/JPL-Caltech/MSSS)

Today (Aug. 6) NASA marks the one-year anniversary of the Mars rover Curiosity's dramatic landing, and you can watch the celebrations online.

From 10:45 a.m. to noon EDT (1445 to 1600 GMT) today, Curiosity team members will reminisce about the rover's harrowing Red Planet arrival on the night of Aug. 5, 2012, which saw the 1-ton robot lowered to the Martian surface on cables by a rocket-powered sky crane.

Then, from noon to 1:30 p.m. EDT (1600 to 1730 GMT), NASA officials at the agency's headquarters in Washington, D.C. and crewmembers aboard the International Space Station will hold a live discussion about Curiosity's mission and how the rover is helping pave the way for human missions to the Red Planet. You can watch both events here on SPACE.com, courtesy of NASA TV.

(If you're confused about whether Curiosity's proper anniversary is today or yesterday, don't blame yourself — it's not clear-cut. The rover touched down at 10:17 p.m. U.S. Pacific Time on Aug. 5, 2012, which SPACE.com regards as the landing date because the mission is run out of NASA's Jet Propulsion Laboratory in Pasadena, Calif. But NASA Headquarters recognizes Aug. 6, because that's when the landing occurred U.S. Eastern Time.)

Curiosity's $2.5 billion mission, which is formally known as the Mars Science Laboratory, set out to determine if the Red Planet could ever have supported microbial life. The rover notched that goal in March, when mission scientists announced that a site called Yellowknife Bay was indeed habitable in the ancient past.

The car-size robot is now rolling toward the foothills of the huge and enigmatic Mount Sharp, its main science destination since before Curiosity blasted off in November 2011. Mission scientists want the rover to read the history of Mars' changing environmental history as it climbs up through the mountain's lower reaches.

The trek to Mount Sharp covers about 5 miles (8 kilometers) of straight-line distance. Curiosity should finish the long traverse in a year or so, NASA officials have said.