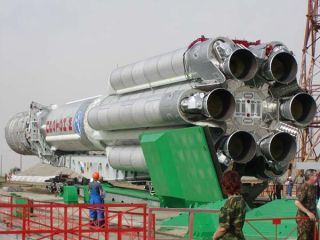 A Russian rocket successfully launched the largest telecommunications satellite ever to serve Spanish-speaking customers in Latin America - as well as North American and European markets - into space during a Tuesday evening flight.

Sitting atop a Proton-M launch vehicle, the Amazonas satellite rocketed away from its staging grounds at Baikonur Cosmodrome in Kazakhstan.

"The Amazonas satellite will revolutionize communications in Brazil and across the Americas," said Mark Albrecht, president of the McLean, Virginia-based International Launch Services (ILS), which marketed the launch.

The Amazonas satellite lifted off from Baikonur's Launch Pad 39 at 6:32 p.m. EDT (2232 GMT), the first step in its journey into orbit. A Breeze M upper stage was expected to deliver the spacecraft into a geosynchronous transfer orbit about nine hours and 11 minutes into the flight. Spacecraft separation was expected to occur at 3:45 a.m. EDT (0745 GMT) on Aug. 5.

Amazonas was built by France's EADS Astrium for the telecommunications firm Hispamar, a Brazilian subsidiary of Hispasat in Spain. The spacecraft weighs about 10,020 pounds (4,545 kilograms) and is based on EAD's Eurostar E3000 satellite platform. Its mass, combined with satellite's 63 transponders, makes Amazonas the largest ever launched for Latin American telecommunications services. It is also the most powerful satellite in the Hispasat fleet.

"Amazonas is the most important satellite for Latin America," said Hispasat chairman Luiz Perrone. During its 15-year designed lifetime, the satellite will be managed from a control center in Rio de Janeiro, he added.

The successful Amazonas launch marked the third Proton launch for ILS in 2004 and the seventh successful flight overall this year. The group's next launch, a classified payload for the National Reconnaissance Office to ride an Atlas 3AS, is slated for Aug. 27 using an Atlas 2AS rocket.