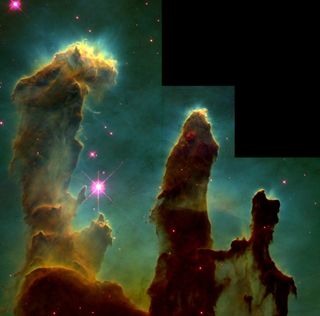 The Eagle Nebula, captured here by the Hubble Space Telescope, contains molecular hydrogen that can only be seen when it interacts with other molecules in space.
(Image: © NASA/EAS/STScI/J Hester and P Scowen (Arizona State University))

With the Hubble Space Telescope's successor, the James Webb Space Telescope, on schedule to reach outer space in 2018, taking Hubble's place as NASA's premier eye in the sky, it seems appropriate to look back on what may become Hubble's most enduring legacy: its stunning images. Besides the huge amount of data Hubble has collected since its launch in 1990, the telescope will likely be remembered most for its gorgeous color shots of nebulas, galaxies and the early universe, iconic images that seemed tailor made for magazine covers and bedroom walls.

But throughout the storied history of the Hubble Space Telescope, the beauty of those color images has sometimes overshadowed one important question: Where does that color come from? After all, some of Hubble's amazing photos— and images from other space telescopes, for that matter — depict astronomical objects in ultraviolet or infrared light. But the human eye can't perceive those colors. When people look at a Hubble image showing these hues, what exactly are they seeing?

One person with answers is Ray Villard, the news chief at Maryland's Space Telescope Science Institute (STScI), which operates Hubble. According to Villard, the public often has the wrong idea about Hubble images. "People assume you're painting by numbers, but you're not," Villard said. [Amazing Hubble Space Telescope Photos: Latest Views]

The raw Hubble images, as beamed down from the telescope itself, are black and white. But each image is captured using three different filters: red, green and blue. The Hubble imaging team combines those three images into one, in a Technicolor process pioneered in the 1930s. (The same process occurs in digital SLRs, except that in your camera, it's automatic.)

Why are the original images in black and white? Because if Hubble's eye saw in color, the light detector would have to have red, green and blue elements crammed into the same area, taking away crucial resolving capability. Without those different elements, Hubble can capture images with much more detail.

The tricky part is when Hubble uses infrared or ultraviolet filters. These wavelengths of light, respectively above and below the visible spectrum,are full of what Villard calls "invisible colors." Human eyes simply don't see them. Therefore, if astronomers want to make these images reflect the light's full spectrum—including ultraviolet and infrared wavelengths – visible colors have to be added in.

Those added colors aren't random, though. "A common misconception," noted Villard, "is that when people hear that color is added, they think that the scientists are like kids with crayons." On the contrary, astronomers are very careful to stay as true to nature as they can. Thus, in full-spectrum images, the details that correspond to infrared light will have the reddest color and the details corresponding to ultraviolet will have the bluest. Or, as Zolt Levay, the imaging-resource lead at STScI, put it, "What is redder in a Hubble image really is redder."

In short, the coloring process for Hubble images is not done willy-nilly."The colors of the images have meaning," said Levay. "They depend on the data." When people at STScI work with a full-spectrum Hubble image, they are in essence translating one kind of light into another so human beings can perceive it.

All of this manipulation begs one enormous question: Why add color at all? If the coloring process necessarily involves human manipulation, wouldn't it be better, and safer, to stay with the original black-and-white versions?

Villard claims the contrary. Color images are "full of information," he said. "In fact, color is an analytical tool. It helps the understanding."

First, for objects that would otherwise be too faint for the human eye to see,the team adds color to make the objects visible. Second, the team uses color to depict details that the human eye can't see, like astronomical features only visible in infrared or ultraviolet light. Third, color can highlight delicate features that would be otherwise lost.

For example, Hubble took one 1995 image of the Cat's Eye Nebula using three filters: one that captured light produced by oxygen atoms, one for light produced by hydrogen atoms and one for light coming from nitrogen ions. All three colors, though, fall in the red part of the visible spectrum. To make all of the parts of the nebula as visible as possible, and to avoid just producing a red mess, the imaging team made some adjustments. [Photos: Hubble's Ring Nebula Portraits]

They assigned red to the hydrogen light, green to the nitrogen light and blue to the oxygen light. Human beings then assigned the colors, but not without a reason behind every decision. As Levay noted, the coloring process is "a dance between the subjective (the color that's applied) and the objective (the data)."

A centuries-old debate among philosophers bears directly on this issue of astronomical images, color and reality. The question is whether colors exist in objects and human beings merely see what is out there in the world, or whether colors are, in a sense, properties of the mind that arise when human beings perceive something, and are experienced differently from one individual to another. Leave it to the Hubble Space Telescope to connect an ancient intellectual tradition with cutting-edge technology and the wonders of nebulas, galaxies and burning suns.