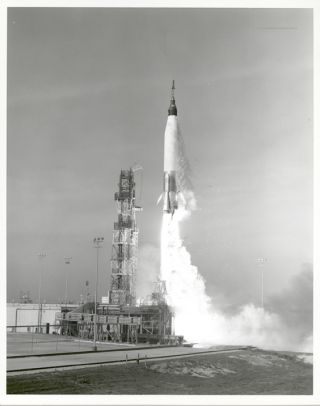 This spacecraft booster was launched from Cape Canaveral in what was known as a Project Mercury test.
(Image: © NASA.)

In this historical photo from the U.S. space agency, this Project Mercury test on Feb. 21, 1961, a spacecraft booster by a modified Atlas, was launched from Cape Canaveral, Florida. The Mercury capsule reached a peak altitude of 107 statute miles and landed 1.425 miles down range.

The current operational Atlas II family has a 100% mission success rating. For more information about Atlas, please see Chapter 2 in Roger Launius and Dennis Jenkins' book To Reach the High Frontier published by The University Press of Kentucky in 2002 (in which Dennis Jenkins notes on page 98 that "as a space launch vehicle there is no question that Atlas has made a mark for itself, and a great deal of money for its manufacturers").