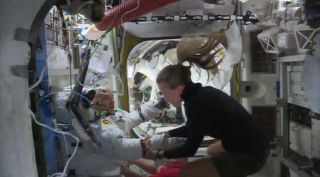 European Space Agency astronaut Luca Parmitano felt like a "goldfish in a fishbowl" when water leaked into his spacesuit during a spacewalk outside the International Space Station on Tuesday (July 16).

Parmitano reported feeling cold water on the back of his head inside his helmet early on during the planned 6.5-hour spacewalk. After the leak worsened, Mission Controllers on the ground decided to bring Parmitano and NASA astronaut Chris Cassidy back inside the space station, ending the spacewalk early after one hour and 32 minutes.

"For a couple of minutes there — maybe more than a couple of minutes — I experienced what it's like to be a goldfish in a fishbowl from the point of view of the goldfish," Parmitano, the first Italian astronaut to walk in space, said during a media interview downlinked from the space station.

You can watch a portion of Parmitano's video interview on SPACE.com.

Once the spacewalk was aborted, Parmitano started to make his way back to the station's U.S. Quest airlock with water obscurring his vision. He had difficulty communicating as he got back inside the space laboratory. [See photos from the aborted spacewalk]

Space station crewmembers Karen Nyberg of NASA and Russian cosmonauts Fyodor Yurchikhin, Alexander Misurkin and Pavel Vinogradov were waiting as Parmitano re-entered the station. Parmitano's fellow astronauts helped the spaceflyer out of his leaking spacesuit, mopping up the water that had pooled on his eyes, ears and nose.

"I went back using just memory basically going back to the airlock until I found it and then went inside," Parmitano said. "Chris [Cassidy] was there in split seconds to come inside, close the airlock and repressurize. Karen was already there ready to repressurize. Our Russian colleagues were all there to help, and as soon as the two compartments were equalized, they doffed — meaning they took off — my helmet, wiped [the water from] my face … about 3 pounds of water, I would say, and that was the end of it."

NASA officials are still investigating the cause of the spacewalk-ending water leak.

The tasks scheduled for Parmitano and Cassidy's aborted walk in space — the 171st excursion supporting the station's construction and maintenance — were not urgent and can be rescheduled for a spacewalk sometime in the future, NASA officials have said.

Parmitano became the first Italian astronaut to walk in space on July 9 when he performed his first spacewalk with Cassidy.

The $100 billion International Space Station is the product of a collaboration of 15 different countries represented by five space agencies. Rotating crews of astronauts have continually staffed the station since 2000.