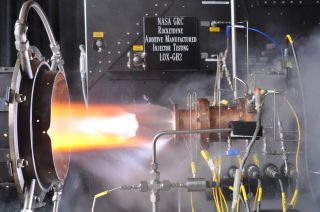 "Hot-fire-testing the injector as part of a rocket engine is a significant accomplishment in maturing additive manufacturing for use in rocket engines," Carol Tolbert, manager of the Manufacturing Innovation Project at NASA's Glenn Research Center in Cleveland, Ohio, where the tests were conducted, said in a statement. [10 Amazing 3D-Printed Objects]

"These successful tests let us know that we are ready to move on to demonstrate the feasibility of developing full-size, additively manufactured parts," Tolbert added.

"NASA recognizes that on Earth and potentially in space, additive manufacturing can be game-changing for new mission opportunities, significantly reducing production time and cost by 'printing' tools, engine parts or even entire spacecraft," Michael Gazarik, NASA's associate administrator for space technology in Washington, D.C., said in a statement.

"3D manufacturing offers opportunities to optimize the fit, form and delivery systems of materials that will enable our space missions while directly benefiting American businesses here on Earth," he added.

NASA's interest in 3D printing appears to be strong and growing. For example, the space agency is partnering with California company Made in Space to send a 3D printer to the International Space Station next year.

And NASA recently funded the development of a prototype "3D pizza printer" that could help feed astronauts on long space journeys, such as the 500-day trek to Mars.

"The injector is the heart of a rocket engine and represents a large portion of the resulting cost of these systems," Haynes said in a statement. "Today, we have the results of a fully additive manufactured rocket injector with a demonstration in a relevant environment."