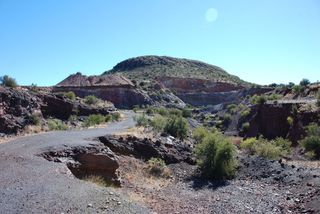 For an astrobiologist, going into the field doesn't have to mean going to another planet.

There's plenty to learn about life in the cosmos by studying what our planet has to offer. To help in this exploration, the Lewis and Clark Fund supports the field work of early career scientists. The eight awardees from last year traveled to different corners of the world, from South Africa to the Swedish Lapland. They've come back with data, technical know-how, and a few traveler's tales.

The Lewis and Clark Fund for Exploration and Field Research in Astrobiology is supported by the NASA Astrobiology Institute and the American Philosophical Society (APS). The APS played an important role back in 1804 with the "original" Lewis and Clark Expedition. Each year for the past eight years, these organizations select a handful of graduate students and junior scientists to receive financial assistance for astrobiological field studies. [See Photos of Earth from Space]

A big question in astrobiology is nailing down when and how oxygenbecame available in Earth's atmosphere. Jena Johnson from the California Institute of Technology traveled to the Northern Cape Province in South Africa to study signs of early oxygen chemistry in 2.4 billion year old rocks.

"The South African rock record is the least deformed of the few deposits from this time," Johnson says.

To reach this geologic gem, Johnson and her colleagues bushwacked into a remote region where monkeys and ostriches were the primary inhabitants.

"Underneath the desert shrubs, there are sedimentary deposits recording this incredibly important time interval - the end of the anoxic Archean eon and birth of oxygen during the Paleoproterozoic era," Johnson says.

In her fieldwork, Johnson collected samples from a wide range of strata to see if she could place better constraints on this geological crossroads.

Previous observations have exposed a possible contradiction in the mineral content of these very old rocks. In particular, deposits of manganese oxidefound in the sediment presumably formed in the presence of atmospheric oxygen. However, the same rocks contain a ratio of sulfur isotopes that suggests little or no O2 was around at the time.

"Two intriguing possibilities exist," Johnson explains. "Either manganese is a more sensitive redox proxy [than sulfur] and is recording the initial rise of atmospheric oxygen, or the original manganese oxides were formed by transitional manganese-oxidizing phototrophs before water-oxidizing photosynthesis had evolved."

Johnson and her colleagues believe they have ruled out the former hypothesis, which implies that the manganese oxides came from early photosynthesis combined with manganese chemistry. Manganese-oxidizing organisms are well-known, but this would be the first evidence of "manganese eaters" using sunlight. These microbes may have set the stage for the cyanobacteria that presumably filled Earth's atmosphere with their oxygen "waste product."

Johnson and her collaborators are releasing a paper in the Proceedings of the National Academy of Sciences on their evidence for a 2.4 billion-year-old manganese-oxidizing phototroph.

"I think I do science for the moments when it hits me that I'm holding a rock that was a sediment billions of years ago and saw a completely different ocean filled with totally foreign life (to us!)," Johnson says. "Using this rock, I can find clues to piece together what this former world was like."

Rock coatings in the land of the midnight sun

On the other side of the world in the Swedish Lapland, Cassandra Marnocha of the University of Arkansas did her own study of rocks. However, her interest is not what's in them but what's on them. Specifically, she went to a valley, called Kärkevagge, north of the Arctic Circle to collect rock coatings, which are common mineral accretions found on rocky surfaces.

"Kärkevagge is home to widespread and especially diverse rock coatings," Marnocha says. "Many of the minerals found in the coatings in Kärkevagge have been identified on Marsvia satellite and rover."

Marnocha wants to know what influence biology may have on these coatings. To study those in Kärkevagge, she only had a small window of opportunity, since the region is covered in snow for nearly 250 days of the year. But arriving at the height of summer meant she had to cope with 24 hours of daylight.

"Eyemasks and extra window coverings didn't help me," Marnocha says. However, the sleepless nights were compensated by the fact that "there’s no threat of the sun going down and cutting down your time in the field," she says. [The Search for Life on Mars in Photos]

That fieldwork focused on collecting samples of the local rock coatings. Although astrobiologists have previously studied "rock varnish" from different parts of the world, Marnocha says that little has been done on coatings that resemble those on Mars. She and her colleagues have analyzed several "martian-like" coatings in Kärkevagge and have identified several microbial inhabitants.

"We have a lot of extremophiles, mostly acidophiles and psychrophiles," she says. "And we also have a lot of bacteria with metabolisms that are potentially important in the formation of the rock coatings."

If she and her colleagues can show that the coatings in Kärkevagge arise from a biological process, then the implication might be that Martian rock coatings have a similar biological origin.

"If we find evidence for past or present life on Mars, it may be a strong indicator that life arises readily in the right conditions," Marnocha says. "My work is but a small building block in reaching the answer to that question, and it is a thrill to be part of it."

Far from Martian analogues, Elizabeth Sibert of Scripps Institution of Oceanography spent time in Gubbio, Italy, to study how open ocean fish faired during the dinosaur-extinguishing event that occurred 65 million years ago.

"I have been working on fish abundance and diversity (from the tooth fossil record) across this extinction horizon from different regions of the world," Sibert says.

Earlier studies on plankton suggest that the so-called K-Pg (formerly known as the K-T) extinction event was harder on some parts of the ocean than others. To map out this non-uniform response, Sibert has been studying ocean drill cores from the North and South Pacific Ocean as well as the South Atlantic.

For the North Atlantic region, Sibert selected the Gubbio site as the most natural choice. This is where Walter and Luis Alvarez discovered the original iridium anomaly at the K-Pg boundary between the Cretaceous and Paleogene geological periods. This anomaly was convincing evidence that an asteroid or comet impact caused the disappearance of the dinosaurs and many other organisms. [Read More About Dinosaurs Here]

Because of its historical importance, the rock layers at the Gubbio site are well-characterized with precise dating, which is vital to Sibert's work. It also is a "dry" site, which has its advantages as well.

"[The area] consists of deep sea sediments now wonderfully exposed on land," Sibert says. "We can, therefore, take much larger samples than we can obtain from oceanic drill cores."

But the dryness had its downside, as she and her colleagues had to abandon their digging one day because a forest fire broke out nearby. Despite this set-back, Sibert was able to gather up all the samples that she needed and is now sifting through the material, looking for tiny fossils of fish teeth and shark scales.

"Everything looks very promising for us to obtain a really nice record of fish diversity and abundance in the samples," Sibert says.

She is hoping to use this data to understand how fish respond to extreme environments, such as the rapid changes happening in our oceans right now.

From early fish to early land creatures, Timothy Gallagher of the University of Michigan, Ann Arbor, traveled the area around Lake Superior looking for evidence of life on land during the Mesoproterozoic, about 1 billion years ago.

"This period of time earned the nickname 'the boring billion' due to an apparent stability in the global carbon cycle," says Gallagher. "However the microbial biosphere was far from boring during the Mesoproterozoic. For example, stromatolites reached their peak diversity at this time."

The common assumption has been that not much life had made it to land by this time. The rise of land plants and animals happened much later (around 500 million years ago). However, some evidence suggests that a variety of simpler organisms may have "dragged" themselves out of the water over a billion years ago and colonized a significant portion of the land. Their presence would have affected the weathering rate of rocks and thus perturbed the global carbon cycle.

Gallagher is studying this hypothesis in rocks from the Mid-Continent Rift, which stretches from Lake Superior to Kansas. This geological "cut" formed about 1.1 billion years ago when parts of the North American started pulling apart. The rocks in this region are relatively well-preserved.

Over several weeks, Gallagher and his colleagues collected samples from various sites in Michigan, Wisconsin and Minnesota. They are now looking for signs of biological impact.

"I am absolutely fascinated by the active role the biosphere has had in shaping the Earth's surface and atmosphere over time," Gallahger says. "The fact that other planets, which are seemingly inhospitable from a distance, could in fact have a prolific biosphere that is actively shaping their environment blows me away."