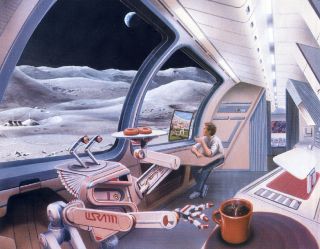 Scientists searching for extraterrestrials are teaming up with one of the world's best-known online-transaction companies to create the first system for space-based payments for astronauts and tourists venturing beyond Earth, project officials announced today (June 27).

Called PayPal Galactic, the new initiative seeks to help lay the financial groundwork for the rapidly evolving field of commercial spaceflight and other private space commerce.

The novel project will investigate the best options for cosmic currency in a cash-free interplanetary society. It also seeks to study the potential changes in store for banks and financial regulations as humanity increasingly expands its activities in space. [9 Ways to Stay Safe Using PayPal]

The new initiative is a collaboration between Internet-payment service PayPal and the SETI Institute (Search for Extraterrestrial Intelligence) research organization, and has backing from Apollo 11 astronaut Buzz Aldrin.

"Trips to Mars, the moon — even orbit — will require we provide astronauts and astro-tourists with as many comforts from home as possible, including how to pay each other," Aldrin said in a statement. "Whether it's paying a bill, even helping a family member on Earth, we'll need access to money. I think humans will reach Mars, and I would like to see it happen in my lifetime. When that happens, I won't be surprised if people use PayPal Galactic for the little things and the big ones."

The project has gained substantial interest, with the advent of numerous private spaceflight firms that plan to send space tourists on trips to the edge of space, orbit and beyond, officials said. Suborbital flight company Virgin Galactic aims to begin launching passengers into space by the end of the year, while Space Exploration Technologies Corp. (SpaceX) intends to loft people into Earth orbit in coming years on its Falcon 9 rocket and Dragon spacecraft.

"As space-tourism programs are opening space travel to the rest of us, this drives questions about the commercialization of space," PayPal President David Marcus said in a statement. "We are launching PayPal Galactic, in conjunction with leaders in the scientific community, to increase public awareness of the important questions that need to be addressed."

The program aims to create an optimal system for processing financial transactions beyond Earth, where the borders of countries and laws don't yet apply.

"One thing is clear: We won't be using cash in space," Marcus said. "PayPal has already pushed payments into the Internet, onto phones and across terrestrial borders. We look forward to pushing payments from our world to the next, and beyond."

The Mountain View, Calif.-based SETI Institute is actively looking for signs of intelligent civilizations across the universe. So far, no reliable signal has been found, but the scientists there are using the dedicated Allen Telescope Array in northern California to look for radio signals that might originate from aliens.

"PayPal and the SETI Institute are well-matched to work on PayPal Galactic because together we can create a recipe for innovation," Jill Tarter, the Bernard M. Oliver Chair for the SETI Institute, said in a statement. "PayPal envisions exploring possibilities in space the way that we do, breaking boundaries to make real progress. When the SETI Institute succeeds in its exploration of the universe, and as we find our place among the stars, PayPal will be there to facilitate commerce, so people can get what they need, and want, to live outside of our planet."

The initiative will be presented during a live press conference today at 9 a.m. PDT (12:00 p.m. EDT) at the SETI Institute. The event will be broadcast live here: www.paypal-galactic.com.