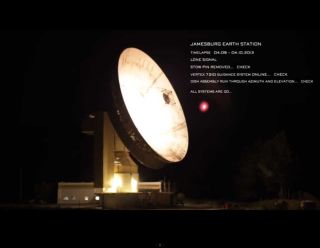 The Jamesburg Earth Station will be responsible for transmitting the messages contributed to the Lone Signal project.
(Image: © Lone Signal Media)

NEW YORK — In 18 years, messages beamed out into space from Earth by a new alien-messaging project Monday (June 17) will reach a distant star system known as Gliese 526.

Officials with the Lone Signal project — a newly launched website designed to send user-written notices to any extraterrestrials who may receive them — hope that their messages might open the first dialogue between Earth and other intelligent life forms.

One of the company's first message beamed to the Gliese 526 system, located 17.6 light-years from Earth was sent by famous futurist Ray Kurzweil and reads: "Greetings to Gliese 526 from Singularity University. As you receive this, our computers have made us smarter, the better to understand you and the wisdom of the universe…" [10 Wildest Ways to Contact Aliens]

"This signal, in 19 hours, will go farther than the Voyager spacecraft has in 40 years," Jason Silva, the host of "Brain Games" on the National Geographic Channel said. He spoke to a crowd of fashion models, businessmen and a handful of scientists in downtown Manhattan honoring Lone Signal's launch on Monday.

Scientists aren't sure if Lone Signal's chosen target of Gliese 526 (a red dwarf star) plays host to any potentially alien-populated exoplanets, but Lone Signal's chief science officer, Jacob Haqq-Misra thinks that it's possible the system harbors life. Gliese 526 is listed in the Catalog of Nearby Habitable Systems.

Lone Signal officials won't put limitations on the messages their users send into space. Although other Lone Signal participants can mark a particular message in the queue as "NSFW" (not safe for work), that doesn't necessarily mean that it won't be beamed toward Gliese 526.

Haqq-Misra doesn't think that this kind of free-range messaging is anymore dangerous than other transmissions being sent into the universe. Radar signals and electromagnetic currents from cell phones and other devices also carry information to far-off places.

Humanity's presence in the universe isn't secret, according to Haqq-Misra.

"We don't really know if [Lone Signal] is more likely to be bad at all," Haqq-Misra told SPACE.com. "It could be more likely to be good. So there's really almost no information as to whether or not we should send radio signals if you're really worried about aliens responding to them … Is Lone Signal dangerous? Are cell phones dangerous? Is radar dangerous? The answer is we don't know."

Lone Signal officials are using the Jamesburg Earth Station, a central California radio dish built in 1968, to beam the messages into outer space. The company holds a 30-year lease with the antenna.

Other scientists and organizations have tried to send messages to possible intelligent beings elsewhere in the universe. One of the most powerful attempts is known as the "Arecibo message" — a powerful radar signal sent to the globular star cluster M13 about 25,000 light-years away. [The Nearest Stars to Earth (Infographic)]

Lone Signal's beams are weaker than the Arecibo message sent from a powerful observatory in Puerto Rico, however, the company's messages are aimed at a much closer region of the universe, Haqq-Misra said.

"What's different about this from previous attempts at messaging to extra-terrestrials is past attempts have been pulses in time that have existed for just a matter of a few seconds or so and then they've ceased," Haqq-Misra said in a video introduction of the website. " … So if we really want to communicate something to a potential extra terrestrial listener, you have to transmit your message repeatedly and with a periodic signal and something that's going to allow a lot of time for them to tune in to the right station."

Any interested person can send his or her first alien communication for free, but extra missives come with a price tag. Another text communiqué can be purchased for one "credit" and photo message cost three. Four credits can be purchased for $0.99, but high rolling space senders can buy 4,000 credits for $99.99.

People around the world can participate in the project in a variety of ways, according to Lone Signal officials:

You can read more about the Lone Signal project and send your first alien communication from the company's website.