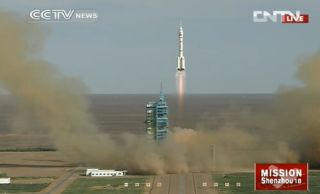 A Chinese rocket roared into space Tuesday (June 11) carrying a crew of three on their way to the nation's space module orbiting Earth.

The trio of astronauts — two men and a woman — blasted off aboard their Shenzhou 10 spacecraft toward the Tiangong 1 module from the Jiuquan Satellite Launch Center in the Gobi desert at 5:38 a.m. EDT (9:38 GMT) — 5:38 p.m. local time.

Shenzhou 10's astronauts Nie Haisheng, Zhang Xiaoguang and Wang Yaping — the second female Chinese spaceflyer — are the fifth Chinese crew to launch into space. The Long March 2F rocket carrying the three spaceflyers is the heaviest ever launched by the nation. [China's Shenzhou 10 Mission in Photos]

The Shenzhou 10 crew is set to dock with the Tiangong 1 module (also called the Heavenly Palace 1) twice during the course of its 15 day mission, Wu Ping, a spokeswoman for China's manned space program said during a briefing on Monday. One docking will be manual, the other automatic, Wu added.

"So far we only conducted three automatic docking tests and a manual one," Wu said, according to state-run Chinese news agency Xinhua. "More tests are needed. We also need to further prove that our astronauts are fit for a longer stay in space and the orbiters are able to support their life and work."

During their time in space, Nie, Zhang and Wang are scheduled to beam a science lesson down to students on Earth from orbit, and test the performance and efficiency of humans and technology in space.

The relatively small Tiangong 1 module has been in Earth's orbit since September 2011. The 8.5-ton structure is about half of the mass of the world's first space station — the Soviet Union's Salyut 1 — and the International Space Station is about 400 metric tons by comparison, Marcia Smith, editor of SpacePolicyOnline.com, wrote in a recent posting.

Chinese media is reporting that this latest journey marks the last of three planned missions to master space rendezvous and docking. Shenzhou 10 is part of China's plan to gain the experience necessary to build and operate a large space station by around 2020, officials have said.

Xinhua has reported that the larger station will be composed of three capsules: Two laboratories and a core unit. The orbiting habitat is expected to weigh more than 90 tons.

Both Zhang and Wang have never flown to space before, but Nie flew for just under five days during the Shenzhou 6 mission in 2005.

After the United States and Russia, China is the third country to launch astronauts into space on its own vehicles.