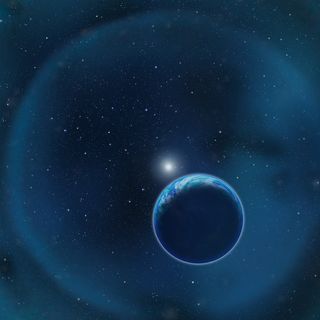 A new study finds that we could detect oxygen in the atmosphere of a habitable planet orbiting a white dwarf (as shown in this artist's illustration) much more easily than for an Earth-like planet orbiting a sun-like star.
(Image: © David A. Aguilar (CfA))

The dead and failed stars known as white dwarfs and brown dwarfs can give off heat that can warm up worlds, but their cooling natures and harsh light make them unlikely to host life, researchers say.

Stars generally burn hydrogen to give off light and heat up nearby worlds. However, there are other bodies in space that can shine light as well, such as the failed stars known as brown dwarfs and the dead stars known as white dwarfs.

White dwarfs are remnants of normal stars that have burned all the hydrogen in their cores. Still, they can remain hot enough to warm nearby planets for billions of years. Planets around white dwarfs might include the rocky cores of worlds that were in orbit before the star that became the white dwarf perished; new planets might also emerge from envelopes of gas and dust around white dwarfs. [Could Rocky Planets Form Around Brown Dwarfs? (Video)]

Brown dwarfs are gaseous bodies that are larger than the heaviest planets but smaller than the lightest stars. This means they are too low in mass for their cores to squeeze hydrogen with enough pressure to support nuclear fusion like regular stars.

Still, the gravitational energy from their contractions does get converted to heat, meaning they can warm their surroundings. NASA's WISE spacecraft and other telescopes have recently discovered hundreds of brown dwarfs, raising the possibility of detecting exoplanets circling them; scientists have already observed protoplanetary disks around a few of them.

White dwarfs and brown dwarfs are bright enough to support habitable zones — regions around them warm enough for planets to sustain liquid water on their surfaces. As such, worlds orbiting them might be able support alien life as we know it, as there is life virtually everywhere there is water on Earth.

"These planets could be like the Earth, but they are relatively unstudied," said study lead author Rory Barnes, a planetary scientist and astrobiologist at the University of Washington at Seattle.

An added benefit of looking for exoplanets around these dwarfs is that they might be easier to detect than ones around regular stars. These dwarfs are relatively small and faint, meaning any worlds that pass in front of them would dim them more noticeably than planets crossing in front of normal stars.

However, unlike regular stars, white dwarfs and brown dwarfs cool as they age, meaning their habitable zones will move inward over time. Barnes and his colleague René Heller at the Leibniz Institute for Astrophysics Potsdam in Germany were curious as to whether this complicated the habitability of planets there.

The most obvious peril of a shifting habitable zone is that it could result in a planet getting so cold all the liquid water on its surface freezes solid. There are other dangers, however — as white dwarfs and brown dwarfs cool, the light they give off would change as well, possibly meaning they would end up sterilizing worlds with dangerous, high-energy radiation.

To be specific, extreme ultraviolet rays would break a planet's water apart into hydrogen and oxygen. The hydrogen can escape into space, and without hydrogen to bond with oxygen, the world has no water and is not habitable.

Such exoplanets would resemble Venus, with dry atmospheres dominated by carbon dioxide. Young white dwarf stars would bathe nearby planets in extreme ultraviolet radiation; the situation is less clear with brown dwarfs, Barnes and Heller said.

At such close distances, the gravitational pull of the dwarfs will significantly flex and heat planets, just as the moon's gravitational tug on Earth results in tides. Too much heating can cause planets to lose all their water, becoming what Barnes and his colleagues dub "tidal Venuses."

Frustratingly, water-rich planets that lose their hydrogen may develop oxygen-rich atmospheres, which astronomers might mistake as a sign of life, the investigators said. Oxygen usually does not stay long in atmospheres — as such, detecting it on an alien world might suggest to scientists that organisms such as plants exist there to generate the gas. [9 Exoplanets That Could Host Alien Life]

White dwarfs should tidally heat planets more than brown dwarfs, since white dwarves are so massive, the researchers noted. White dwarfs are only about the size of the Earth, but they are remarkably dense, with masses nearly two-thirds that of the sun.

All in all, the scientists found it unlikely that planets orbiting white dwarfs would ever be truly habitable. When they are young, white dwarfs would blast planets in their habitable zones with ultraviolet rays that would strip the worlds of water; when they grow older, their habitable zones would shift closer to them, and the amount of tidal heating might also end up desiccating any planets residing in those zones.

To look at what planets around white dwarfs might be like, the scientists analyzed two exoplanet candidates orbiting the star KOI 55, which will soon die and become a white dwarf.

The star, which is about half the mass of the sun, lies about 3,850 light years away, and the putative worlds KOI 55.01 and KOI 55.02, discovered by NASA's Kepler mission, are about two-fifths and two-thirds the mass of the Earth, respectively.

If these candidates do exist, these roughly Earth-sized exoplanets will fall within the habitable zone of KOI 55 when it becomes a white dwarf. However, these worlds are currently roasting under the star's heat and probably losing their water, if they had any, and are therefore unlikely to become habitable later, the researchers said. Gravitational interactions between the exoplanets may also cause sterilizing levels of tidal heating. [A World of Kepler Planets (Gallery)]

Planets orbiting brown dwarfs also run the risk of never achieving habitable conditions, but they may have a slightly better chance than worlds around white dwarfs, the researchers found. Catastrophic tidal heating remains a problem — because these stars are dim, planets must orbit relatively close in to receive enough light to be habitable, but the chances are that tidal forces might simply tear apart planets that are so close to their star.

For instance, a planet might drift into the habitable zone of a white dwarf from a more distant orbit long after the formation of that dead star. It would still have to contend with tidal heating, but it would have avoided radiation that likely would have sterilized its surface.

"The biggest question in my mind is regarding the loss of water," Barnes added. "We don't have a good handle on that process, and also don't know how much water these planets could have to begin with. Therefore estimating the time it takes to lose all water, and hence be uninhabitable, is difficult to quantify at present. It could be that some of these planets retain enough water that, as the habitable zone reaches them, they could still support life."

Still, Bolmont said he thought a proposal aiming to observe planets around brown dwarfs might be accepted in a few years. "If a planet were observed in transit, the [soon-to-be launched] James Webb Space Telescope would be able to probe its atmosphere and teach us a lot about its composition," Bolmont said.

More research is needed to understand how planets orbiting white dwarfs and brown dwarfs form, and "particularly the amount of water they form with," Barnes said. "We also need to understand how the high-energy radiation of brown dwarfs evolves with time. This is the energy that can remove water, but we don't have any idea how strong it can be, and how long it lasts."

Barnes and Heller detailed their findings in the March issue of the journal Astrobiology.