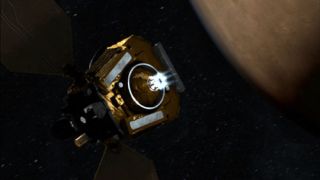 With NASA's MarsReconnaissance Orbiter just hours away from firing its engines to enterorbit around the red planet, scientists on Earth are on pins and needleswaiting for the mission-critical event.

With its six scienceinstruments and high-resolution cameras, MRO is expected to reveal more detailsabout Mars' surface, atmosphere and water cycle than any previous mission todate. The spacecraft is right on target to ignite its engines just after 4:24 p.m. EST(2124 GMT) today during a 27-minute maneuver that, mission managers hope, willplace the spacecraft orbit around Mars.

Orbital arrival is acritical time for any planetary expedition, where the slightest glitch ormistake can send the probe careening past the planet or plunging into itsatmosphere.

"NASA has about anaverage grade of 'C' doing this," McCuistion said oforbit insertion maneuvers. "But these guys will do it. We've got a great team."

Robert Lock, lead missionmanager for the orbiter at JPL, said MRO is right on track for today's orbit insretion maneuver. The spacecraft's flight path is soprecise that two last minute maneuvers - one slated for this morning and theother for late yesterday - were unnecessary.

Ground tracking stations in Spainand California will be listening for MRO's signals asit swings out from behind Mars at about 5:16 p.m. EST (2216 GMT), though flightcontrollers will wait about 30 minutes to allow the orbiter to set itself torights in case it encountered any glitches while out of range, mission managerssaid.

Nothing to do but wait

While engineers and flightcontrollers prepare for MRO's Marsarrival, the mission's science teams awaits news that their probesurvives the ordeal.

"For the science teams right now,this is a period of waiting," said MRO project scientist Richard Zurek during the briefing. "We've checked out theinstruments during the cruise [and] made sure the cameras are in focus."

Larger than any of the three otherorbiters currently studying Mars, NASA's $720 million MRO mission carries ahefty suite of science tools to study the red planet in unprecedented detail. Theprobe is expected to spend two years studying Mars and two more serving as acommunications relay between the red planet and Earth for future spacecraft.

The 4,806-pound (2,180-kilogram) MROprobe is equipped with a six-instrument package that includes the ultrahigh-resolution HiRISE camera, a ground-penetratingradar and several other climate, atmosphere and surface scanning tools totracking Mars' water history and pinpointing potential landing sites for futuremissions.

"It's the most technologicallyadvanced payload that we've ever sent to another planet," said James Graf,NASA's MRO project manager at the Jet Propulsion Laboratory (JPL) in Pasadena,California, said in a March 8mission update. "I think we're ready."

But MRO'sarrival in Mars orbit is just the beginning of its pre-science phase.

Thespacecraft is expected to enter a 35-hour orbit today that ranges from 350miles (563 kilometers) to 27,000 miles (43,452 kilometers) in altitude aboveMars. Over the next six months or so, the probe will dip into Mars' atmosphereabout 550 times in process called aerobraking, which uses friction and drag with theplanet's upper atmosphere to slow and shape its orbit.

Mission managers are targeting afinal circular orbit about 190 miles (305 kilometers) above the Martiansurface. MRO launchedfrom Earth on Aug. 12, 2005 atop an Atlas 5 rocket and spent seven monthsflying to Mars.

"It's pretty exciting," NASAresearcher Candice Hansen-Koharcheck, a science teammember for MRO's HiRISEcamera, said Thursday of the planned orbital arrival. "I am just going to be abasket of nerves."