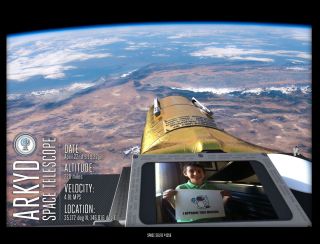 Planetary Resources’ crowdfunded telescope will have a camera that can take photos of the spacecraft next to user-submitted pictures, enabling what the company calls the first “space selfies.”
(Image: © Planetary Resources)

A commercial asteroid-mining company aiming to launch a crowdfunded space telescope raised more than $200,000 on the first day of its campaign.

Planetary Resources, a private venture aiming to mine near-Earth space rocks for water, minerals and other resources, announced Wednesday (May 29) that it would build and launch a space telescope for public use if it could raise at least $1 million in 33 days.

The telescope will be a twin copy of the Arkyd spacecraft the company is developing to detect, track and study asteroids in preparation for its mining mission. A test version of the spacecraft is set for its maiden trial flight in April 2014, while the crowdfunded model would launch in early 2015. [Gallery: Planetary Resources' Asteroid Mission]

The spacecraft's public backers would use it to study celestial objects of their choice. They would also have the option of sponsoring research projects at schools, universities or museums that could use the instrument.

"For me, that's the single most exciting part of this, that it will be available to science classrooms, to astronomy classrooms, and kids will be able to do deep space exploration on this telescope on par with what's being done by NASA and other organizations that control all of the satellites," Brent Spiner, the actor who played Data on the "Star Trek: The Next Generation" television series, said during a webcast to raise funds for the project Wednesday night. "This one will belong to the people."

The project is part of Planetary Resources' plan to make space more accessible to average people, its officials siad.

"I am here to represent the sci-fi crowd, and the line between sci-fi and reality is blurring more and more as time goes on and I think that's what really exciting about this," Spiner said.

Planetary Resources is developing an interface to serve a variety of users, from scientists to kindergarten students.

"If you're a beginner, an 8-year-old, and you want to take a picture of Mars, you'll be able to do it, "Planetary Resources co-founder and co-chairman Peter Diamandis said Wednesday during a press event at the Seattle Museum of Flight announcing the campaign."It'll be easy and appropriate for the level of user."

The telescope will also take "space selfies" — self portraits that show the telescope in orbit, with a user-submitted photo displayed on the instrument's screen. A camera mounted on the hull of the spacecraft will snap the photo. Already more than 200 backers have ordered selfies for $25 and above.

"We are putting a webcam on the shoulder of Christopher Columbus as he explored the New World," said Planetary Resources co-founder and co-chairman Eric Anderson. "You are literally going to have the chance to see and feel and listen to what it's like to explore the solar system."

The crowdfunding project, hosted on the Kickstarter website, came about as a way to involve the public in Planetary Resources' mission, which has garnered enthusiastic public support since its announcement in April 2012, its founders said."When we announced the company last April, we really were blown away by the level of interest and excitement," Diamandis said."We were not ready for it."

The company has grand plans for public engagement, beyond the space telescope. "In the future, we're going to be looking at using this crowd that we're developing to help us do data analysis of asteroids, help us develop crowd-sourced software, and even hardware," Diamandis said."Our goal is to democratize the access to space."

But if the crowdfunding campaign fails to reach its $1 million goal by June 30, the company will receive none of the money it has raised.

"All of you out there who believe in this, you've got to put your money where your mouth is," Anderson said. "You've got to help us out,".

To learn more about the Planetary Resources crowdfunding campaign, visit its Kickstarter page here: ARKYD: A Space Telescope for Everyone.