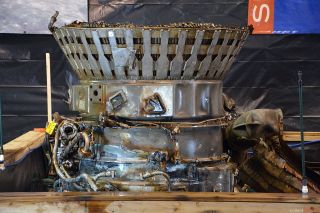 Although they stood up to the immense thrust needed to launch the mighty Saturn V rocket toward the moon, it turns out that the mammoth F-1 engines that powered the booster's first two-and-a-half minutes of flight were no match for the Atlantic Ocean.

The twisted and tattered remains of at least two engines, salvaged from the seafloor by an expedition organized and funded by Amazon.com CEO Jeff Bezos, are set to go on public view in Kansas on Friday (May 24) as conservators work to preserve them for generations of museum-goers to come.

"I personally didn't think the impact with the surface of the ocean would rip the engines apart like it did," Jim Remar, president of the Kansas Cosmosphere and Space Center in Hutchinson, told collectSPACE.com during a preview of the F-1 engines' observation gallery on Monday (May 20). "Given that these are comprised of some of the strongest superalloys known to man, I thought to some degree that the engines would have remained virtually intact."

It isn't known how fast the engines — still attached to the rocket's first stage — were falling when they impacted the ocean more than 40 years ago. Having finished their job, accelerating the Saturn V to more than 6,000 miles per hour (9,600 kilometers per hour) and pushing the rocket to more than 40 miles high (64 kilometers), they were allowed to drop back to Earth for a violent splashdown.

"It was almost like the ocean ripped these things apart like an aluminum can," said Remar. [Gallery: First Look at Amazon CEO’s Moon Engines]

Found strewn across the seafloor by Bezos Expeditions in 2012 and raised to the surface earlier this year, the 25,000 pounds (11,340 kilograms) of historic engine parts arrived at the Cosmosphere's SpaceWorks conservation facility in March to be stabilized, preserved and documented.

Looking somewhat like a space-age sculpture garden, the F-1 engine parts are "planted" in two large wooden basins where they are constantly being bathed in freshwater and intermittently sprayed with a corrosion inhibitor. Over the next couple of months, the larger parts will be moved into tanks to be immersed in corrosion-halting chemicals, while the finer parts are hand cleaned by conservators.

"Once we have stabilization, what we'll do is a process of systematic disassembly, assuming that the disassembly doesn't damage the artifact," Remar described. "If we feel at any point that taking the artifact apart is going to harm its integrity, then we won't take it apart."

After being carefully cleaned and doused in a lacquer-like protective sealant, the parts will be reassembled into the same pieces they were in when salvaged from the ocean floor. They will not be rebuilt into intact engine displays.

"What we're going to do here is preserve the artifact and allow the entire life of the artifact to tell the story," Remar explained. "Equally important to the history of the artifact is the fact that it was used to boost the Saturn V, but then it also has as part of its story the impact with the surface of the ocean as well as the time it spent at the bottom of the ocean."

"Our objective is to remove all the corrosive process, halt it and then preserve it for generations to come," he said.

The Cosmosphere's glassed-in observation gallery offers a close-up view of the conservators at work, set against the backdrop of the basins filled with the larger engine parts. A total of 13 major components were raised and are now undergoing conservation.

"If you think of an engine as having four components — the turbo pump, the heat exchanger, the thrust structure and the LOX [liquid oxygen] dome — we have two prime pieces of each of those," said Remar. "We actually have five thrust structures, three LOX domes, two turbo pumps and two heat exchangers, and then we have one nozzle." [Apollo 11 Moon Rocket's F-1 Engines Explained (Infographic)]

Despite the significant dents and torn edges, most of the parts are recognizable, if you are familiar with the build of the F-1 engine. Most, that is, except the nozzle, or engine bell, which is a spaghetti-like mound of tubes and strips.

"The state that [the F-1 parts are] in is sort of sad," former space shuttle astronaut Steven Hawley, who serves as an advisor to the Cosmosphere, told collectSPACE as he got his first look at the engines on Monday. "[But] I think the fact that there are big pieces left shows how robust [the F-1] really was."

"The fact that parts like the injector plate are in such good shape shows you how well it was constructed," he added.

Eventually, the preserved F-1 engine parts will be moved to other museums for display, but the process to conserve them will take about two years.

"Sometime in late spring or early fall 2015 is when, at this point, we anticipate having the process completed," said Remar.

In the meantime, visitors to the Cosmosphere are invited to see the engines being conserved.

"It is awesome to stand here in the presence of this [F-1 engine] hardware with the knowledge that it was what put people on the moon. That is really impressive," remarked Hawley. "The fact that it could be recovered after 40 some years is also pretty impressive."

Click through to collectSPACE.com to take a first look at the F-1 engines being conserved at the Kansas Cosmosphere's SpaceWorks Observation Gallery.