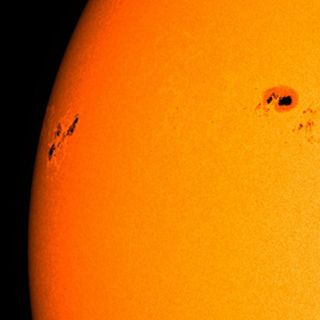 The super-active sunspot responsible for unleashing the three most powerful solar flares of 2013 within a 24-hour stretch this week is slowly rotating toward Earth and will likely be facing our planet by the weekend, experts say.

Active Region 1748, as the sunspot is known, unleashed three monster solar flares between Sunday and Monday (May 12 to 13). Every one of the solar storms registered as an X-class flare — the most powerful type — with each successive event stronger than the last, culminating in an X3.2 megablast Monday night.

These solar explosions did not affect Earth, since AR1748 was not facing our planet at the time. But the sunspot is now circling into view, so future flares and any associated eruptions of super-hot solar plasma — called coronal mass ejections (CMEs) — could potentially target our planet, scientists say. [Sun Unleashes Biggest Flares of 2013 (Photos)]

"In a couple of days, it will be far enough onto the disk that any CMEs that we got would probably have some impact on Earth," solar astrophysicist C. Alex Young, of NASA's Goddard Space Flight Center in Greenbelt, Md., told SPACE.com.

AR1748 should be near the center of the solar disk by around Saturday, Young added.

"If it sends something off, then we can expect to get some CMEs sort of head-on" at that point, he said.

Sunspots are temporary dark and relatively cool patches on our star's surface where the local magnetic field is very strong. They frequently, but not always, serve as staging grounds for powerful solar flares and CMEs.

At about the size of two Earths, AR1748 is not a particularly large sunspot. (Sunspots can stretch for tens of thousands of miles across the solar surface.) But the active region does appear to have an unusually complex structure, Young said.

Because AR1748 is near the sun's limb at the moment, it's tough to say if its complexity is increasing, which could be an indicator of future activity. But things should become clearer in the next day or so, as scientists get a better look at the sunspot, he added.

While researchers will take AR1748's complexity and evolution into account when gauging its future eruption potential, they'll also look closely at its past behavior.

"One of the biggest indicators of an active region flaring is that it already flared," Young said. "In this case, the fact that it's already put out a really large flare gives it a strong possibility that it'll do it again."

Scientists give AR1748 a 40 to 50 percent chance of firing off another X-class flare, he added, though this probability is a rough estimate that could change as further information becomes available.

X-class flares aimed at Earth can have consequences on a planet-wide scale, triggering widespread radio blackouts and long-lasting radiation storms.

Solar activity waxes and wanes over an 11-year cycle. The current cycle, called Solar Cycle 24, is ramping up toward an expected peak later this year.

Scientists have been tracking the sun's weather cycle since 1843, when it was first discovered. Today, NASA and other space agencies use sophisticated satellites and spacecraft to monitor the sun's activity with high-definition instruments to keep tabs on space weather events.