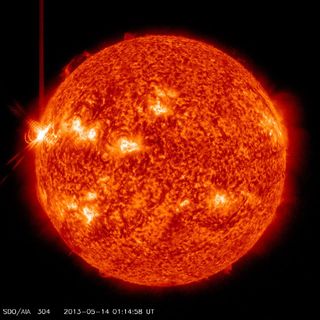 This image shows an X3.2 solar flare (far left) erupting from the sun late Monday (May 13, 2013) as seen by NASA's Solar Dynamics Observatory. It was the third major X-class solar flare in 24 hours.
(Image: © NASA/SDO)

The sun, it seems, is in overdrive. Late Monday night, the sun unleashed its third major solar flare in 24 hours — the biggest and most powerful solar storm of the year, so far.

This latest sun storm erupted Monday (May 13) at 9:11 p.m. EDT (0111 GMT) and registered as an X3.2 solar flare, one of the strongest types of flares the sun can release, space weather officials said. It came on the heels of two other recent X-class solar flares on Sunday night and Monday, all of which were sparked by a highly active sunspot on the sun's far left side.

"Clearly an extraordinary active region is making its way fully onto the visible disk," SWPC officials wrote in a morning update today (May 14). "Can it keep up this hectic pace?"

Two of the three recent solar flares have been associated with massive explosions, called coronal mass ejections, which flung super-hot solar material into space at millions of miles per hour. Because the sunspot firing off the flares is not yet facing Earth, the solar eruptions pose no threat to satellites and astronauts in orbit, NASA has said.

"This marks the 3rd X-class flare in 24 hours," officials with NASA's sun-watching Solar Dynamics Observatory wrote in a statement. "Just like the two before this one also happened over the eastern limb of the sun and is not Earth-directed."

According to astronomer Tony Phillips of Spaceweather.com, scientists have just given the active sunspot a name: AR1748. It is one of nine active numbered sunspots currently visible on the surface of the sun.

While AR1784 has been spouting off many solar flares in recent days, most of them more moderate, M-class solar flares, the events on Sunday and Monday are taking solar activity to another level.

"These are the strongest flares of the year so far, and they signal a significant increase in solar activity," Phillips wrote in a Spaceweather.com update this morning.

X-class solar flares are the most powerful types of solar storms. When aimed directly at Earth, these major solar events can pose a danger to astronauts and satellites in space, as well as interfere with radio and GPS navigation signals.

The first X-class solar flare of 2013 (the Sunday event) registered as an X1.7 on the flare scale, with the mid-day Monday flare rating as an X2.8, NASA officials said.

Solar activity on the sun rises and falls over the course of its 11-year cycle. The sun is active phase of Solar Cycle 24 as it approaches its peak activity period, called solar maximum, which is expected to occur later this year.