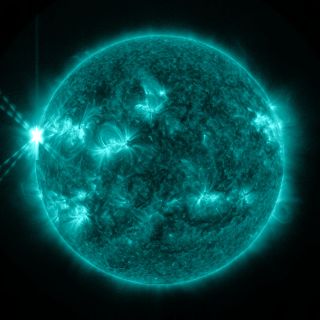 On May 13, 2013, an X2.8-class flare erupted from the sun -- the strongest flare of 2013 to date. This image of the flare, shown in the upper left corner, was captured by NASA's Solar Dynamics Observatory in light of 131 angstroms, a wavelength which is particularly good for capturing the intense heat of a solar flare and which is typically colorized in teal.
(Image: © NASA/SDO)

A hyperactive sunspot on the surface of the sun has fired off two of the most powerful solar flares of the year in just 24 hours, and promises to unleash more solar storms over the next several days, space weather experts say.

The active sunspot went into overdrive on Mother's Day when it erupted late Sunday night (May 12) with an X-class solar flare, the strongest type of solar storm possible, NASA scientists said in an update. That first eruption registered as an X1.7-class event on the space weather scale, and was followed midday Monday by an even more powerful X2.8 solar flare, which is the third-strongest solar storm in recent years.

You can see a video of the huge solar flares together here as seen by NASA's Solar Dynamics Observatory and other spacecraft. [See more photos of the sun's X-class solar flares]

The Mother's Day solar flare sent a super-hot wave of solar plasma, called a coronal mass ejection, hurtling through space at about 2.6 million mph (4.3 million km/h). The second flare on Monday sent solar plasma streaking through space at a mind-boggling 4.3 million mph (6.9 million km/h). The solar eruptions were not aimed at Earth, so should pose no threat to satellites and astronauts in orbit, NASA officials said.

"If warranted, operators can put spacecraft into safe mode to protect the instruments from solar material," NASA officials explained in a statement. "There is some particle radiation associated with this event, which is what can concern operators of interplanetary spacecraft since the particles can trip computer electronics on board."

The back-to-back solar storms erupted from an active sunspot region that is just out of sight over the left side of the sun. The region has been active in recent days, spouting off two medium-strength M-class solar flares, but the two X-class solar storms are its most powerful events yet.

The region "will soon rotate into view" as seen from Earth, NASA officials said. When it does, any major solar flares and eruptions could be aimed squarely at Earth.

"Increased numbers of flares are quite common at the moment because the sun's normal 11-year activity cycle is ramping up toward solar maximum, which is expected in 2013," NASA officials said in the update Monday.

When aimed directly at Earth, X-class solar flares can pose a serious risk to astronauts and satellites in space, and interfere with GPS and communications signals. The strongest solar storms can even affect ground-based power system infrastructure. Moderately strong solar flares can supercharge the Earth's northern lights to create spectacular aurora displays.

The sun's current space weather cycle is called Solar Cycle 24 and began in 2008. A fleet of spacecraft, including NASA's powerful Solar Dynamics Observatory, keep constant watch on the sun for signs of solar flare activity.

NASA and the Space Weather Prediction Center operated by the National Oceanic and Atmospheric Administration are providing updates throughout today on the recent solar flares.

Editor's note: This story was updated at 4 p.m. ET with new details on a huge solar eruption associated with the Monday X2.8-class solar flare.