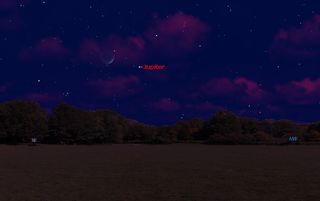 This sky map shows the location of Jupiter and the moon in the northwest evening sky on May 12, 2011, at 9 p.m. local time for observers in mid-northern latitudes.
(Image: © Starry Night Software)

Mother Nature will provide everyone with a cosmic Mother's Day gift in the form of an eye-catching celestial sight early Sunday night (May 12).

If your local weather is reasonably clear as darkness falls, be sure to look low toward the west-northwest part of the sky. You will see a rather narrow sliver (8 percent illuminated) of a crescent moon just three days past new phase.

Situated to the right of the moon and a bit lower is a very bright silvery "star" shining with a steady glow. But that’s no star; it's the largest planet in the solar system: Jupiter. [Amazing Photos Taken by Stargazers in May 2013]

The gap separating the moon and the planet will be 5 degrees in the sky. A clenched fist held at arm’s length measures roughly 10 degrees, so in this case, Jupiter and the slender lunar sliver will appear roughly a half fist apart.

Soon, Jupiter will end its brilliant, nearly yearlong stay after many months of impressive display. You can still see it, albeit rather low in the west-northwest sky, as early as 30 to 40 minutes after sunset.

With the exception of Venus — which is visible for only about an hour after sunset — Jupiter is still the brightest "star" in that region of the sky. But Jupiter is actually dimmed to some degree by low altitude and its great distance from Earth (556 million miles or 895 million kilometers) on the far side of the solar system.

Jupiter is currently setting about 20 minutes after the end of evening twilight — around 10:15 p.m. for mid-northern latitudes. Next Friday (May 17), Jupiter will set around twilight’s end, and thereafter, it will set before the sky becomes completely dark.

Later this month, Jupiter is set to go out with a bang. The planet will team up with Mercury and Venus in an unusual and striking bunching of three bright planets within a relatively small spot in the sky — called a planet trio.

The pinnacle of the trio — which will last nearly a week — will be Jupiter’s close and beautiful conjunction with Venus just before Jupiter vanishes into the sunset. Jupiter will pass within 1 degree of Venus on May 28 and, a few days later, will be gone completely, hidden behind the overpowering glare of the sun.

On what date do you think you will last see it?

Editor's note: If you have an amazing picture of the full moon or any other night sky view that you'd like to share for a possible story or image gallery, send photos, comments and your name and location to managing editor Tariq Malik at spacephotos@space.com.

Joe Rao serves as an instructor and guest lecturer at New York's Hayden Planetarium. He writes about astronomy for Natural History magazine, the Farmer's Almanac and other publications, and he is also an on-camera meteorologist for News 12 Westchester, New York. Follow us on Twitter, Facebookand Google+. Original article on SPACE.com.