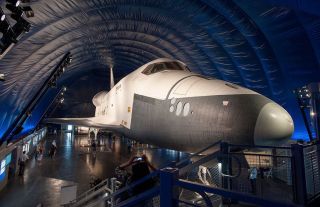 Enterprise's new "Space Shuttle Pavilion," located at the Intrepid Sea, Air & Space Museum in Manhattan, replaces its original display home that was destroyed by Hurricane Sandy in October 2012. The replacement structure is now under construction around and above the prototype shuttle and is expected to be completed over the coming weeks.

"After many months of hard work recovering from Sandy we are extremely excited to announce the opening of our new Space Shuttle Pavilion, and to once again [be able to] share Enterprise with all who visit the museum," Intrepid president Susan Marenoff-Zausner said in a release. "Our team is working hard to bring an incredible exhibit to life that will allow Enterprise to continue to inspire generations of innovators and dreamers for years to come." [See Photos of the Space Shuttle Enterprise Coming to New York]

Enterprise, which did not fly in space but was used for a series of astronaut-piloted approach and landing tests in 1977, first opened to the public on board the flight deck of the Intrepid, a converted aircraft carrier, on July 19, 2012.

Repairs to the black and white, iconic orbiter were finished in March, when construction of its new pavilion began with the erection of a metal framework.

"We know space shuttle Enterprise is in good and caring hands, and we hope everyone has an opportunity to visit this important part of our space exploration history in the new pavilion," NASA Administrator Charles Bolden said in a statement.

The new exhibition facility keeps several of the features of the original display while adding exhibits and experiences.

Visitors to the Intrepid will still be able to walk underneath Enterprise, which sits 10 feet (3 meters) off the deck, and view the shuttle from above, now from a larger observation platform than before. A short film produced for the Intrepid that traces the history of Enterprise and the space shuttle program, narrated by "Star Trek" actor Leonard Nimoy, is also returning.

The redesigned pavilion will now include a "soundscape entryway" featuring the audio exchanges between NASA's flight controllers and the astronauts who flew Enterprise, as well as a new stage for demonstrations and expanded exhibits highlighting technology spin-offs from the 30-year shuttle program.

Enterprise's structure will also serve as the new home for millionaire "space tourist" Gregory Olsen's Russian Soyuz TMA-6 capsule, which he loaned to the museum in 2011 and is currently displayed on the Intrepid's hangar deck.

The pavilion, sponsored by Time Warner Cable, remains a temporary home for the prototype shuttle. The Intrepid is planning to build a permanent exhibit facility for Enterprise that would display the orbiter near, but not on, the aircraft carrier, while providing enhanced educational programs.