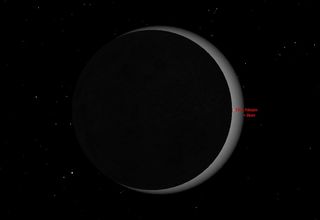 A meteor shower and a cosmic "ring of fire" will dominate the night sky this month.

The annual Eta Aquarid meteor shower and an annular solar eclipse both occur at the beginning of May, while a less impressive lunar eclipse is set to take place at the end of the month, but that isn't all. Constellations, planets and other celestial bodies can also be spotted in various parts of the sky throughout the month, weather permitting.

"As night falls, look for Jupiter shining in the west," Nancy Calo from the Space Telescope Science Institute said during her narration of a video highlighting May stargazing. "The best views of Jupiter will come early in the month, when it is highest in the sky. In the closing days of May, Mercury and brilliant Venus will join Jupiter low in the west. A telescope will provide better views of the planets." [See sky maps for May's best stargazing events]

A telescope isn't required to see the Eta Aquarid meteor shower this weekend, however. The shower is expected to peak after midnight on May 5, and viewers can expect to see about 10 meteors per hour coming from the eastern part of the sky, Calo said. The Eta Aquarids are one of two meteor showers created by dusty debris left over from the famed Halley's Comet. The Orionid meteor shower in October is the other.

On May 10, a few days after the meteor shower's peak, stargazers in certain parts of the world can see an annular solar eclipse that should make the sun look like a shining ring in the sky. Annular solar eclipses are also known as "ring of fire" eclipses because they occur when the moon does not completely block the sun, leaving a bright ring visible around the moon.

Weather permitting, some parts of the world will get a partial view of the eclipse — created when the moon passes between the sun and the Earth, obscuring the star — but Australia and the southern part of the Pacific Ocean will get the best showing. It will not be visible from North America.

A minor lunar eclipse will take place on May 24, but viewers might not be able to tell.

Although the eclipse will be visible to stargazers in South America, western Europe and western Africa, the full moon will only pass through the Earth's penumbral shadow. This part of the planet's shadow still receives some direct sunlight, making it difficult to see a difference between regular moonlight and the dimmer light of the eclipse.

May's lunar eclipse will most likely be less impressive than the partial lunar eclipse in April. During that eclipse, the moon dipped into the umbra — the part of Earth's shadow that doesn't receive any direct sunlight — which obscured part of the rocky face of the satellite in darkness.

A smattering of deep sky objects will also be visible throughout the month.

Jupiter can be seen in the western part of the sky in early May and Saturn appears in the southeastern sky after sunset.

"Looking toward the south, we’ve turned away from the crowded center of our Milky Way Galaxy," Calo said. "Thus we see farther into the universe."

By using a pair of binoculars, stargazers can peer into the Virgo cluster of galaxies, spot the Whirlpool Galaxy and see the M64 spiral galaxy, Calo added.

Editor's note: If you have an amazing picture of any night sky view that you'd like to share for a possible story or image gallery, send photos, comments and your name and location to managing editor Tariq Malik at spacephotos@space.com.