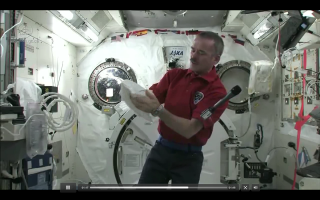 Canadian Space Agency astronaut Chris Hadfield shows students back on Earth how to throw up in space.
(Image: © CSA/NASA)

How do you throw up in a place where "up" and "down" don't exist?

Puking in the microgravity of the International Space Station can be quite a problem, but that doesn't mean it never happens.

Astronauts get sick even in the weightlessness of the orbiting outpost, and thanks to a new video from Canadian Space Agency astronaut Chris Hadfield, everyone on the surface of the Earth can get a glimpse of how it happens.

"When we first get to space, we feel sick," Hadfield said to a group of students back on the planet. "Your body is really confused. You're dizzy. Your lunch is floating around in your belly because you're floating. What you see doesn't match what you feel, and you want to throw up."

The space station commander then opened up a "barf bag" and showed the students the proper method for up-chucking in space.

"Think about what happens on Earth when you throw up," Hadfield said. "You throw up and you have a bag of something horrible and then you throw it away, but if I have this bag, what am I going to do with it? This bag is going to stay with me in space for months, so we want a really good barf bag."

Astronaut barf bags have liners that can be used to clean a spaceflyer's face post-puke, added Hadfield. There is also a very durable zip-lock bag that prevents the waste from floating around the $100 billion orbiting laboratory.

This video is just one of the many life-in-space clips Hadfield has beamed down from the space station. His short explainers detail everything from how to cook spinach in space to how to clip your nails.

He even has a video explanation for how to wring out a wet washcloth in microgravity — probably a helpful clip for anyone who has just finished throwing up in space.

Hadfield is the commander of an international team of six astronauts that make up the Expedition 35 team. NASA astronaut Tom Marshburn and Russian cosmonaut Roman Romanenko will fly back to Earth with Hadfield in May after a six month stay on board the space station.