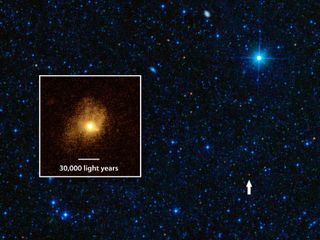 The tiny red spot in this image is one of the most efficient star-making galaxies ever observed, converting gas into stars at the maximum possible rate. The galaxy is shown here in an image from NASA's Wide-field Infrared Survey Explorer (WISE), which first spotted the rare galaxy in infrared light.
(Image: © NASA/JPL-Caltech/STScI/IRAM)

Scientists have found what may be the most environmentally friendly galaxy ever seen, a galactic star factory that operates with a nearly 100-percent efficiency rate. It is located about 6 billion light-years from Earth.

Most galaxies use just a small fraction of their available fuel to make stars, but SDSSJ1506+54 is quickly consuming all its gas for star formation. And while stars tend to form in discrete knots of activity in the spiral arms of most galaxies, in this case, gas has collected in the galaxy's center, where a furious riot of star formation is taking place.

"We are seeing a rare phase of evolution that is the most extreme — and most efficient — yet observed," astronomer Jim Geach of McGill University, who led the study, said in a statement.

New stars form when gas condenses under the weight of gravity, squeezing atoms to the point that nuclear fusion ignites. But when stars form, their powerful radiation blows gas outward, counteracting the condensing action of gravity, making it harder for the gas around them to form new stars. This effect limits the maximum possible rate of star formation, even in galaxy SDSSJ1506+54.

"We see some gas outflowing from this galaxy at millions of miles per hour, and this gas may have been blown away by the powerful radiation from the newly formed stars," said study co-author Ryan Hickox, an astrophysicist at Dartmouth College in New Hampshire.

Despite its oddness, SDSSJ1506+54 is probably not a weird type of galaxy, but rather a normal galaxy caught in a short-lived phase of evolution, the scientists say. Within a few tens of millions of years, the galaxy will likely have used up most of its gas and will become a typical elliptical galaxy.

The researchers first noticed the galaxy in all-sky survey data collected by NASA's WISE space telescope, which ended its mission in 2011. In infrared light, the galaxy glows with the brightness of 1 trillion suns, researchers said.

Observations of the galaxy from the Hubble Space Telescope in visible light then revealed the extreme compactness of the galaxy, where most of the light was coming from a region just a few hundred light-years across.

"While this galaxy is forming stars at a rate hundreds of times faster than our Milky Way galaxy, the sharp vision of Hubble revealed that the majority of the galaxy's starlight is being emitted by a region with a diameter just a few percent that of the Milky Way," said Geach.

To measure how much gas was contained in the galaxy, the astronomers used the IRAM Plateau de Bure interferometer in the French Alps. It detected millimeter-wave light from the galaxy, which is an indicator of hydrogen gas, the main fuel for stars. These measurements, combined with the estimated rate of star formation in the galaxy derived from WISE data revealed the excellent efficiency of galaxy SDSSJ1506+54 in turning gas into stars.

The findings are detailed in a paper published in the Astrophysical Journal Letters.