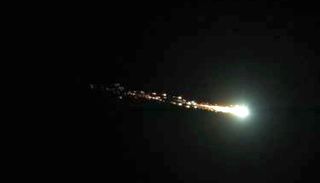 The dramatic fireball that exploded over Russia in February got many people wondering if there is any way to anticipate future dazzling meteors before they appear.

Well, meteors not associated with an annual shower are certainly tough to predict. But there are some patterns that skywatchers can keep in mind to maximize their chances of spotting a fireball (which technically is any meteor that shines more brightly than Venus in the sky).

For example, springtime is "fireball season," when the number of bright meteor sightings increases by as much as 30 percent, NASA experts say. And the three-day stretch from Tuesday (April 23) to Thursday (April 25) is perhaps the best time to watch for the next prospective fireball event, which might possibly even lead to the fall of a meteorite. [5 Amazing Fireballs Caught on Video]

Over the years, some real dazzlers have been seen during this time frame. And in at least two cases, the orbits of the meteors were virtually identical, suggesting Earth might hit more such space rocks when it passes through this part of its orbit.

A river of rubble?

Is there perhaps a "river of rubble" orbiting the sun that is populated by rather large meteoroids?

Unlike most of the annual meteor showers that are composed chiefly of dust and sand-sized particles — such as the Lyrids, which peaked overnight Sunday (April 21) — this supposed fireball stream might be made up of objects that are considerably larger, perhaps originating in the main asteroid belt between Mars and Jupiter or perhaps being shed by the nucleus of a long-dormant comet.

The circumstantial evidence for such a meteor stream lies with two brilliant fireballs that appeared during the 1960s.

One of these fireballs cast shadows over northern New Jersey on April 23, 1962. The other was seen by thousands of people over England, Wales and Northern Ireland on April 25, 1969 and also dropped a 0.6-pound (0.27 kilograms) meteorite in the town of Sprucefield, Northern Ireland.

After enough ground observations were gathered, orbits for both objects were computed. Remarkably, the two turned out to be very similar.

Something to “Crow” about

Both the New Jersey and United Kingdom meteors seemed to emanate from a spot in the sky near the constellation of Corvus (the Crow).

Corvus is a rather striking star pattern situated low in the southeast sky around 9 p.m. local daylight time — a little four-sided figure of fairly bright stars, like a triangle whose top has been removed by a slanting cut.

By around midnight it appears almost due south, and by the first light of dawn it’s disappearing beyond the southwest horizon. So any brilliant fireballs traveling on a general south-to-north trajectory might be related to this supposed fireball stream, especially if they seem to come from the direction of Corvus.

Here are three other possible candidate "Crow" meteors, all of which blazed up on the calendar date of April 25:

April 25, 1966: This brilliant exploding meteor passed northward over New Jersey and eastern New York into Canada along a flat trajectory. Observations were analyzed by both U.S. and Canadian experts, who determined that the end point of the meteor's visible path was at an altitude of around 9 miles (15 kilometers) near Huntingdon, Quebec. Canadian astronomers B.A. McIntosh and J.A.V. Douglas noted, "The anticlimax of so spectacular an event is surely the failure to recover meteorites ... Much of the possible fall area is either sparsely populated or unfavorable terrain for recovery." They suggest that part of the meteoritic mass may have come down in the rugged Adirondack Mountains, along the trajectory but before the end point.

April 25, 1971: A man named James A. Lewis reported that he and his wife heard a "thunder-like" sound in north-Central Wisconsin. "I thought it was lightning," Lewis wrote, "until I looked up and saw the fireball-like object hurtling northerly through the clouds. It seemed to break up about 30 degrees above the northern horizon." (As reported in Natural History Magazine, Vol. LXXX, No. 7, August-September 1971).

April 25, 2005: A fireball was seen as far north as Portland, Maine and as far south as Long Island. A Federal Aviation Administration spokeswoman said that a number of witnesses thought the meteor was a plane crashing in Connecticut, the Associated Press reported at the time.

It should be stressed that this possible fireball stream bears no relation to the annual performance of the Lyrid meteor shower. [Spectacular Lyrid Meteor Photos from 2013]

If you do plan on watching the night sky for any prospective fireball activity this year, keep in mind that you're going to have stiff competition from a very bright moon which, unfortunately, turns full on April 25.

The moon’s brilliant light will squelch the light of all but the brightest stars, but if you’re lucky enough to witness a fireball suddenly bursting forth, it should easily be seen in spite of the moonlight.

Also keep in mind that any potential fireball sightings are likely to be very few and very far between. This plus that bright moon might sound discouraging, but considering what some have been lucky to see in the past around this time of year, it still just might be worthwhile to spend a little time under the stars on the nights of April 23, 24 and 25.

Editor's note: If you snap a great photo dazzling fireball that you'd like to share for a possible story or image gallery, send photos, comments and your name and location to managing editor Tariq Malik at spacephotos@space.com.