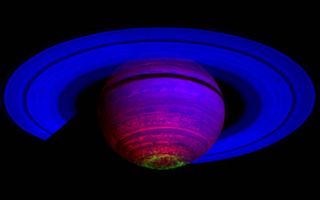 Composite image of Saturn shows the entire planet, including the rings as seen by NASA's Cassini spacecraft from the south. The green glow represents aurora lights. Full Story.
(Image: © NASA/JPL/University of Leicester/University of Arizona)

Astronomers using an observatory in Hawaii kicked off a month-long campaign to study the northern lights on Saturn study Sunday (April 21) in a live webcast from Hawaii's iconic Keck Observatory.

During a three-hour webcast, scientists discussed everything from the ringed planet's atmosphere to new discoveries made about the gas giant in the last year. While speaking with the public via social media, the researchers also used the Keck Observatory to observe auroras on Saturn to understand how the mysterious phenomenon works. The scientists weren't able to show live-video of the observations, but they did review some major Saturn discoveries during the webcast.

"Up until now, it's like we have been looking at the aurora in black and white — and now we're trying to look in color," Tom Stallard, an astronomer at the University of Leicester who participated in the observations yesterday, said in a statement. "We're hoping to get much more depth to the observations we have taken — filling in a far more complete picture of the aurora as a whole, rather than disconnected parts." [See Amazing Photos of Saturn's Rings]

The month-long campaign organized by astronomers from the University of Leicester in the U.K. brings together an international group of observers using the Cassini spacecraft in orbit around Saturn, the Hubble space telescope and the European Southern Observatory's Very Large Telescope in Chile. Over the course of the next month, scientists will take observations of the ringed beauty to understand its northern lights.

Yesterday, scientists were following up on their surprising finding that Saturn's rings cause it to "rain" on the planet. This "ring rain" on Saturn changes the molecular composition of the planet's atmosphere, potentially creating its distinctive dark and light bands on the planet's face, author of the study James O'Donoghue said.

The ring rain could be responsible for influencing the auroras of the planet. By using this observing time from Keck, the scientists are hoping to understand exactly what that influence could be.

"The weather wasn't great at that time," O'Donoghue said of the two hours it took them to make the ring rain discovery. These new measurements are going to focus on refining those results, O'Donoghue added.

Auroras on Earth are created when charged particles from the sun shoot toward the planet. The particles are trapped in Earth's magnetic field and are pulled into the planet's atmosphere, creating the brilliant light show at the poles.

This time of the Saturnian year is particularly important for observations of Saturn because the planet's seasons are shifting. The gas giant is about to enter into its seven-year-long spring, and scientists are hoping to observe the planet's new season from as many different angles as possible.

The Keck Observatory, located on the summit of Mauna Kea in Hawaii, houses two 33-foot (10 meters) telescopes that observe in both the optical and infrared range of light.

The Cassini spacecraft — managed by NASA, the European Space Agency and the Italian Space Agency — has been in orbit around Saturn since 2004 and is now on an extended mission that will last until at least 2017.