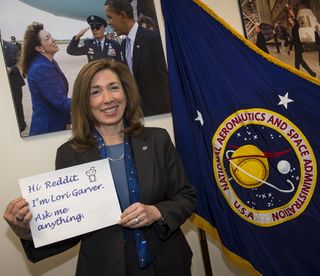 If you've ever wanted to ask a NASA bigwig questions about America's space program, here's your chance: Agency second-in-command Lori Garver will host an "Ask Me Anything" session on the popular social-news site Reddit Wednesday (April 17).

"I am NASA Deputy Administrator Lori Garver, and you can ask me anything on Reddit tomorrow at 2 p.m. EDT," Garver said Tuesday (April 16) via Twitter, where she posts as @Lori_Garver.

Garver might be participating from Virginia's Mid-Atlantic Regional Spaceport, which is hosting the maiden launch of the private cargo-carrying Antares rocket. Liftoff is slated for Wednesday at 5 p.m. EDT (2100 GMT), and Garver's name is on the list of attendees.