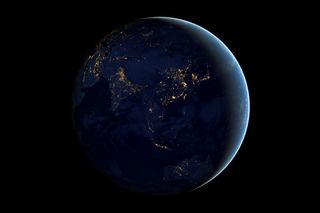 This image of Asia and Australia at night is a composite assembled from data acquired by the Suomi NPP satellite in April and October 2012. The new data was mapped over existing Blue Marble imagery of Earth to provide a realistic view of the planet.
(Image: © NOAA/NASA/SuomiNPP)

NASA is celebrating the third planet from the sun through April.

The space agency is giving Earth the royal treatment with a month of special videos and events designed to showcase the beauty and wonder of the solar system's blue marble.

To mark the occasion, NASA officials are putting out a new "Earth lesson" every day and recently released a video showing off some of the most amazing images of the planet beamed down from orbit.

NASA officials are also featuring ways that people on the planet can sustain it. From arctic sea ice decline to Tropical Storm Isaac, the space agency's Earth Month website gives users information about how to help their home planet.