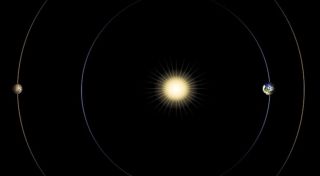 This diagram illustrates the positions of Mars, Earth and the sun during a period that occurs approximately every 26 months, when Mars passes almost directly behind the sun from Earth's perspective. This arrangement, and the period during which it occurs, is called Mars solar conjunction.
(Image: © NASA/JPL-Caltech )

NASA's robotic Mars explorers are taking a cosmic break for the next few weeks, thanks to an unfavorable planetary alignment of Mars, the Earth and the sun.

Mission controllers won't send any commands to the agency's Opportunity rover, Mars Reconnaissance Orbiter (MRO) or Mars Odyssey orbiter from today (April 9) through April 26. The blackout is even longer for NASA's car-size Curiosity rover, which is slated to go solo from April 4 through May 1.

The cause of the communications moratorium is a phenomenon called a Mars solar conjunction, during which the sun comes between Earth and the Red Planet. Our star can disrupt and degrade interplanetary signals in this formation, so mission teams won't be taking any chances.

"Receiving a partial command could confuse the spacecraft, putting them in grave danger," NASA officials explain in a video posted last month by the agency's Jet Propulsion Laboratory (JPL) in Pasadena, Calif. [The Boldest Mars Missions in History]

MRO and Odyssey will also keep studying the Red Planet from above, and they'll continue to serve as communications links between the rovers and Earth. The conjunction will also affect the European Space Agency's Mars Express orbiter, officials have said.

Odyssey will send rover data home as usual during conjunction, though the orbiter may have to relay information multiple times due to dropouts. MRO, on the other hand, entered record-only mode on April 4. The spacecraft will probably have about 52 gigabits of data to relay when it's ready to start transmitting again on May 1, MRO officials have said.

Mars solar conjunctions occur every 26 months, so NASA's Red Planet veterans have dealt with them before. This is the fifth conjunction for Opportunity, in fact, and the sixth for Odyssey, which began orbiting Mars in 2001.

But it'll be the first for Curiosity, which touched down on Aug. 5, kicking off a two-year surface mission to determine if the Red Planet has ever been capable of supporting microbial life.

"The biggest difference for this 2013 conjunction is having Curiosity on Mars," Odyssey mission manager Chris Potts, of NASA's Jet Propulsion Laboratory in Pasadena, Calif., said in a statement last month.