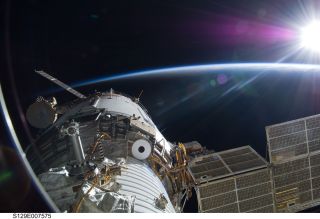 An experimental 3D-textured solar cell is set to be bolted to the outside of the International Space Station (ISS), where it will experience 16 "sunrises" each day as part of a harsh performance test.

A proposal submitted by W. Jud Ready, a professor of materials science at Georgia Tech, to study the performance of his "3D" textured solar cell in space was recently accepted by the Center for the Advancement of Science in Space (CASIS), the organization that manages research onboard the ISS. His solar cell, made from carbon nanotubes coated in an experimental light-absorbing material, will hitch a ride to the ISS sometime next year.

"It will be placed out on what they euphemistically call the back porch of the Japanese Experiment Module...It plugs into, literally, a USB port," Ready said.

As the ISS orbits the Earth every one and a half hours, the panels will be hit by sunlight from all directions, giving Ready and the team a way to test multiple configurations very quickly.

"If you were to go through all the possible configurations on Earth, it would be very challenging," Ready said.

The team will be testing the cells, coated with a copper-zinc-tin-sulfur mixture, for the optimum size and spacing of the tiny 3D bumps.

Ready’s 3D thin-film solar cells have been tested on Earth and were found to outperform flat/untextured thin-film cells of the same composition. Because of the 3D structure (which looks like millions of tiny skyscrapers when viewed under a microscope), when light hits the cell, it bounces deeper into the structure and is trapped, rather than reflecting away.

In a flat cell — especially early and late in the day, when the sun is at an angle — "the performance really suffers," Ready said.

On the other hand, the performance of the 3D solar cell actually improves at sunset, as light strikes it at a sharper angle.

Nonetheless, Ready hopes the solar cells will stay in space longer. "In my proposal," he said, "I said to leave them up there until they all failed."