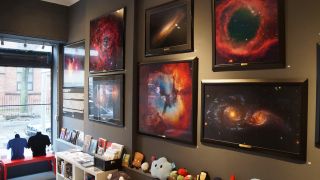 Throughout the month of March, Robert Gendler's astrophotographs are on display at Grumpy Bert gallery in Brooklyn.
(Image: © Miriam Kramer / SPACE.com)

NEW YORK — An astrophotographer who has snapped images of the cosmos from a driveway in Connecticut is taking center stage in a Brooklyn space art exhibit.

Robert Gendler has loved snapping pictures of the night sky for years. What started off as a vague childhood interest in the cosmos has become a hobby that Gendler has carried with him through most of his adult life.

"I picked it up as a hobby in Connecticut and started taking pictures," Gendler said. "It became a real passion."

Gendler's work is being presented here at the Grumpy Bert gallery in a show entitled "The Universe in Color." His work went on display this month and will remain on the gallery's walls until Sunday (March 31). Usually, his photos have a home in the hospital where Gendler works as a radiologist.

"I have a passion for the visual," Gendler said of his hobby and chosen profession.

The astrophotographer's work has changed in recent years. Gendler used to set up a telescope with a camera attached on his driveway to take photos of stars, galaxies and other cosmic bodies.

In recent years, however, light pollution has gotten in the way of Gendler's work. In 2005, he moved his equipment to an observatory in New Mexico, and began taking his photos remotely. A few years later, Gendler started using telescopes in Australia to get a sense of the Southern Hemisphere.

"There are many exciting objects in the south," added Gendler.

For the most part today, Gendler does not take the photos himself. Recently, he has become interested in crafting "mosaic images" from data collected by space agency-operated telescopes.

Astronomers point high-powered telescopes at the same heavenly bodies from different perspectives around the world, and most of the collected data is publicly available on the Internet, said Gendler. He takes those photos and combines them to make new, more detailed images of astronomical phenomena.

It takes Gendler tens of hours to create just one photo.

This time-intensive method is paying off. Gendler's mosaic work has been featured by the Hubble Heritage Program. His composite image of the M106 spiral galaxy was created using images taken by three different cameras on the Hubble Space Telescope.

Gendler's photos are on display and sale at Grumpy Bert through March.