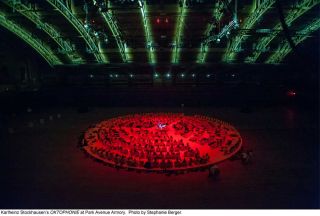 A new artistic experience in New York City gives audience members a new way of viscerally experiencing what space could be like
(Image: © Stephanie Berger)

NEW YORK — It's dark and quiet in here.

The only light in the cavernous room at the Park Avenue Armory comes from a handful of red-tinted stage lights illuminating the "lunar surface" in the middle of the performance space.

It takes a minute for your eyes to adjust, so it's even more disorienting when someone hands you a white cape and tells you to take off your shoes.

This is the beginning of OKTOPHONIE, the newest sold-out performance experience to grace the halls of the armory.

Visual artist Rirkrit Tiravanija developed the 69-minute OKTOPHONIE light show to accompany Karlheinz Stockhausen's electronic composition of the same name. The "lunar surface" is a circular piece of white carpet in the center of the armory's Wade Thompson Drill Hall.

Most of the room is empty, save for about 375 cushions arranged on the carpet that serve as chairs for the audience members.

The "lunar surface" does not actually look like the actual face of the moon. However, the combination of lights and sound does give a distinctly "space travel-like" tenor to the show. It can be scary, off-putting and uncomfortable at times — much as traveling through space could be for the less experienced.

Except for minimal lighting, the room is pitch black. Dressing the audience in white creates the eerie sense of an uneasy community established by a group of strangers in uniform.

The music itself is droning and atonal. Stockhausen used sounds from his everyday life to punctuate the piece as well, Robertson said. During World War II, the composer was stationed in a field hospital in Germany, and he uses the sounds of fighter planes flying overhead as part of the "Oktophonie" music, said Robertson.

Stockhousen's composition is not performed by a live band; instead a recording of the piece plays through eight speakers mounted on a cube hanging from the armory's ceiling, surrounding the area where the audience sits. Those eight speakers are also responsible for OKTOPHONIE'S name.

They produce a form of audio called "octophonic sound," meant to envelop the audience in the composer's vision.

"It's a prescribed experience by a maverick composer," Robertson said.

OKTOPHONIE will be showing at the Park Avenue Armory until this Wednesday (March 27).