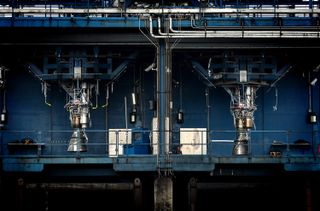 The Merlin 1D engine was judged flight-ready after firing for a total of nearly 33 minutes over the course of 28 different tests at SpaceX's rocket-development facility in McGregor, Texas. The new engine will soon be incorporated into the company's Falcon 9 rocket, officials said.

The Falcon 9 has flown five times to date, most recently on March 1, when it blasted the robotic Dragon capsule toward the International Space Station on California-based SpaceX's second contracted supply run for NASA. According to the company's launch manifest, flight number six will launch a Canadian communications satellite, likely in mid-June. [SpaceX's Amazing Rockets & Spaceships (Photos)]

Company officials say the Merlin 1D will provide a big boost for the Falcon 9, which until now has been powered by Merlin 1C engines in its first stage (nine of them, hence the name).

"The Merlin 1D has a vacuum thrust-to-weight ratio exceeding 150, the best of any liquid rocket engine in history," SpaceX officials wrote in a press release Wednesday. "This enhanced design makes the Merlin 1D the most efficient booster engine ever built, while still maintaining the structural and thermal safety margins needed to carry astronauts."

SpaceX indeed plans to launch astronauts using the Merlin 1D. The company is working on a manned version of its Falcon 9/Dragon transportation system, in the hopes of scoring a NASA contract to ferry astronauts to and from the space station.

SpaceX will also incorporate the 1D into its Falcon Heavy booster, a huge rocket still in development that will use 27 engines in its first stage. The Falcon Heavy will be capable of carrying payloads weighing 53 metric tons to low-Earth orbit, company officials say, and it is also being designed to meet NASA human-rating standards.

The Merlin 1D already powers SpaceX's Grasshopper rocket, an experimental booster that the company hopes will pave the way for a fully reusable launch system. Earlier this month, the Grasshopper lifted off on its fourth test flight, rising 263 feet (80 meters) into the Texas skies before returning to Earth and making a soft landing.