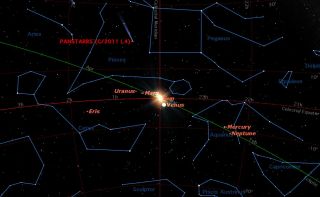 The vernal equinox, which occurs at 7:02 a.m. EDT today (March 20), is probably the most important astronomical event of the year.

Although popularly described as "the first day of spring" in the Northern Hemisphere, the annual event is actually much more important than that. More than any other event, it marks the beginning of the astronomical year.

For something so important in astronomy, it’s surprising that it is something that you cannot observe in any way in the night sky. That’s because it involves the sun, which floods the sky with light and makes it impossible to see what is actually happening.

Modern planetarium software enables us to dim the sun, so that we can see what it is doing in the context of the planets around it and the stars behind it. [6 Signs that Spring Has Sprung]

In the graphic accompanying this story, the celestial equator (located directly above the Earth’s equator) is marked by a red line. Crossing it at an angle is a green line which marks the ecliptic, the path which the sun follows in front of the background stars. This is tilted at an angle because the Earth’s axis of rotation is at an angle, 23.5 degrees.

Notice the months marked along the ecliptic: these indicate the sun's position. February is below and to the right; April is above and to the left. The sun sits on March 20 right in the center. So the sun appears to be moving from right to left across the chart.

In reality, of course, it is the Earth that is moving, and not the sun, but from our viewpoint on Earth it seems just the opposite.

What happens on March 20 is that the sun moves from south of the celestial equator to north of the equator. The days, which have been getting longer since winter solstice on Dec. 21, now equal the nights in length, which is why this is called the "equinox" — Latin for "equal nights."

From now until the summer solstice on June 21, the days will gradually get longer because the sun will be higher in the sky, giving more hours of daylight.

More hours of sun means more warming by the sun, so the days will also get warmer. Also the sun's rays will be striking the northern hemisphere from a more acute angle, so that the same amount of solar radiation is concentrated in a smaller area, amplifying the heating factor.

The graphic shows the constellations in their modern positions. The point at which the equator and the ecliptic cross, traditionally called "the first point in Aries," actually lies today in the constellation Pisces. Aries, where it used to lie, is now up in the upper left corner of the chart.

Similarly, the summer equinox now puts the sun in Sagittarius, off the chart to the lower right, even though it gives its name to the "tropic of Capricorn." One of the differences between astronomy and astrology is that astronomy uses the current positions of the sun and planets in the sky, while astrology uses historical positions which have been out-of-date for thousands of years.

Because the sky has been darkened by the software, we can see how several planets are gathered on the far side (behind) the sun: Uranus, Mars, and Venus. Above the sun and to its left (east) is Comet Pan-STARRS. Below and to the left is the distant dwarf planet Eris, hovering in the far reaches of the solar system.

How did ancient peoples observe and measure the date of the vernal equinox, if it is blocked by the sunlit sky?

They discovered clever ways of marking the rising and setting points of the sun. In some cases they built monuments to refine these measurements. Stonehenge, in southern England, is one of the most spectacular examples of these equinox calendars.

What’s more puzzling is why the "in between" markers are known as "midwinter" and "midsummer" when we all know that they both occur rather early in their named seasons. This happens because the Earth's weather seasons actually lag a month or two behind the astronomical markers.