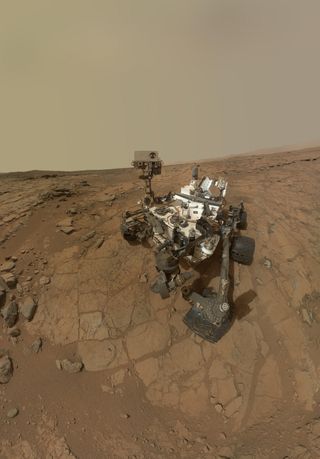 NASA's Curiosity rover has powered down to wait out a Mars-bound solar blast, complicating efforts to bring the 1-ton robot back from a computer glitch.

Curiosity's handlers put the rover on standby after the sun unleashed a medium-strength flare in the Red Planet's direction Tuesday (March 5). It's the second recent shutdown for Curiosity, which had just come out of protective "safe mode" Saturday (March 2) as engineers work through an issue with its primary computer system.

"Storm's a-comin'! There's a solar storm heading for Mars. I'm going back to sleep to weather it out," NASA officials wrote on behalf of the rover via Curiosity's Twitter feed today (March 6).

The rover team views the shutdown as merely a precaution, as Curiosity was designed to withstand such solar outbursts, the Associated Press reported. But the move could delay the rover's return to science operations, which had been anticipated as early as this weekend.

Curiosity landed inside Mars' huge Gale Crater last August to determine if the area has ever been capable of supporting microbial life. The robot had been operating pretty much flawlessly on the Red Planet until last Wednesday (Feb. 27), when it failed to send recorded data home to Earth and didn't shift into its daily sleep mode as planned. [Curiosity Rover's Latest Amazing Mars Photos]

The mission team determined that a glitch had affected the flash memory on Curiosity's main, or A-side, computer system. So engineers swapped the rover over to its backup (B-side) computer, which spurred Curiosity to go into safe mode on Thursday (Feb. 28).

Since then, the robot's handlers have been working to configure the B-side computer for surface operations and fix the problem with the A-side, which they think may have been caused by a fast-moving charged particle known as a cosmic ray.

Curiosity has been on the road to recovery. The rover came out of safe mode on Saturday and began using its high-gain antenna again a day later. Mission officials have expressed confidence that engineers will fix or troubleshoot the glitch soon, saying Curiosity may resume science operations as early as this weekend if all continues to go well.

The solar flare may now push that timeline back a bit, however.

NASA officials do not expect Tuesday's solar flare to seriously affect any of the agency's other robotic Mars explorers, such as the Mars Reconnaissance Orbiter or Opportunity rover, the Associated Press reported.

Tuesday's flare was accompanied by a coronal mass ejection (CME), which blasted a huge cloud of solar plasma toward the Red Planet. CMEs that slam into Earth inject large amounts of energy into our planet's magnetic field, spawning potentially devastating geomagnetic storms that can disrupt GPS signals, radio communications and power grids for days.

But CMEs don't have a similar impact on Mars, which lacks a global magnetic field, scientists say.