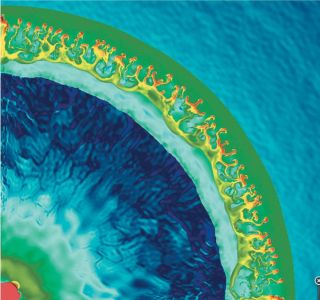 The image shows a simulation of a collision between two shells of matter ejected by a massive star in two subsequent pulsational pair-instability supernova eruptions, only years apart, just before the star dies. Image released Feb. 7, 2013.
(Image: © Ke-Jung Chen/School of Physics and Astronomy, Univ. Minnesota.)

Forecasting when stars will die in giant explosions may one day be possible by looking for the warning outbursts they release beforehand, researchers say.

Supernovas are the most powerful stellar explosions in the universe, visible all the way to the edge of the cosmos. These stars detonate for two known reasons: either from gorging on too much mass stolen from a companion star or by running out of fuel and abruptly collapsing.

Astronomers have suggested that stars can give off smaller explosions just before they go supernova. To find out more about supernovas, researchers used three telescopes — the Palomar Observatory, the Very Large Array and NASA's Swift mission — to investigate a star 500 million light-years away. The star, which had about 50 times the mass of the sun, ultimately detonated as a supernova named SN 2010mc.

The researchers' data suggest that 40 days before the final explosion, the dying star produced a giant outburst, releasing as much matter as 1 percent the mass of the sun — about 3,330 times the mass of Earth — at about 4.5 million mph (7.2 million km/h). [Photos of Great Supernova Explosions]

"What is surprising is the short time between the precursor eruption and the eventual supernova explosion; one month is an extremely tiny fraction of the 10-million-year lifespan of a star," said one of the study authors, Mansi Kasliwal at the Carnegie Institution for Science in Pasadena, Calif.

The close timing between the outburst and the ensuing supernova suggest they are related, lead author Eran Ofek of the Weizmann Institute of Science in Israel said in an email interview. Probability models revealed there was only a 0.1 percent chance that the outburst was a random event.

"Our discovery of SN 2010mc shows that we can mark the imminent death of a massive star. By predicting the explosion, we can catch it in the act," Kasliwal said.

Comparing their data with three models proposed for how the preceding explosion might have occurred, the researchers found that gravity waves helped drive mass to the star's atmosphere. Gravity waves are fluctuations caused by matter rising due to buoyancy and sinking due to gravity.

"For a star like our sun, the energy it is emitting from the fusion of hydrogen into helium deep in the core exerts an outward pressure on the star, usually counteracted by an inward pressure from gravity. However, if the star's luminosity increases above a certain amount — the so-called Eddington luminosity — the outward pressure from the resulting radiation is strong enough to overcome the gravity, which can then power an outflow of material," Sullivan explained. "Gravity waves can act as a conduit to translate this large, super-Eddington luminosity in the core into an ejection of material from the outer envelope of the star, just like we observed."

The scientists detail their findings in the Feb. 7 issue of the journal Nature.