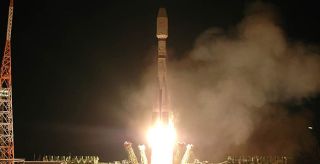 On Feb. 6, 2013, Soyuz lifted off from Baikonur Cosmodrome on the fourth and final Arianespace/Starsem mission currently contracted by Globalstar for the deployment of its second-generation satellite constellation.
(Image: © Arianespace)

Once all 24 second-generation satellites are operating with six first-generation spacecraft that were launched later than the others, Globalstar will be able to restore its two-way voice service.

Performance of the first-generation constellation began to degrade in 2007 and ultimately forced Globalstar to all but abandon voice service, which it calls Duplex, in favor of less-profitable data services. The degradation is believed to have been caused by radiation in the satellites’ operating orbit.

“We fully expect Duplex service to be restored to the high level of quality that Globalstar customers historically enjoyed,” Globalstar Chief Executive Jay Monroe said in a statement. Monroe and his family’s Thermo group of companies financed a large portion of Globalstar’s second-generation effort, with help from the French export-credit agency, Coface.

Globalstar’s second-generation satellites were manufactured by Thales Alenia Space of France and Italy. Globalstar and Thales Alenia Space are still negotiating terms for a final batch of six satellites. The spacecraft, with reinforced radiation protection, are designed to operate for 15 years, about double the contractual life of the first generation.

The Evry, France-based Arianespace consortium, with its Russian-French Starsem affiliate, was the launch service provider.