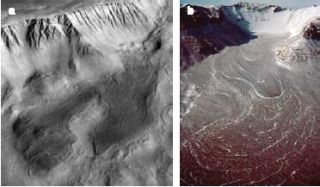 A glacier at the base of the towering Olympus Mons volcano on Mars (left) compared to an Antarctic glacier. Deposits in the left image are darkened for emphasis.
(Image: © Nature/ESA/ David Marchant)

Glacial deposits near the equator on Mars are remnants of snow on the red planet long ago, scientists said today.

Spacecraft observations in recent years have revealed ice-rich landforms and other clues, including boulders strewn about, that appear to have been caused by glaciers as recently as 350,000 years to 4 million years ago.

Researchers have puzzled over how ice could form so far from the polar regions. Underground water bubbling to the surface was one proposed scenario.

Instead, just as on Earth, the glaciers were created by snowfall, the new study concludes.

Here's how Head and his colleagues think it happened:

A few million years ago, Mars had a different tilt. The poles were pointing more closely toward the Sun, so the polar ice caps released massive amounts of water vapor into the atmosphere. Wind carried the vapor south, up and over the slopes of the Tharsis Montes volcanoes and Olympus Mons, the solar system's largest volcano.

The vapor cooled, condensed and fell as snow. The snow turned to ice over time and formed glaciers.

The model is described in the Jan. 20 issue of the journal Science.

The researchers assumed the Martian water cycle of today but plugged in a 45-degree axial tilt. The model accurately predicted what has been observed by Mars Express, Mars Global Surveyor and Mars Odyssey orbiters.

"The findings are important because they tell us that Mars has experienced big climate changes in the past, the kinds of climate change that led to the Great Ice Age here on Earth," Head said. "The findings are also interesting because this precipitation pattern may have left pockets of ice scattered across Mars. This is good information for NASA as officials plan future space missions, particularly with astronauts."

Astronauts would need water for drinking and, in the typical mission scenario, to extract hydrogen for fuel needed on the return voyage.