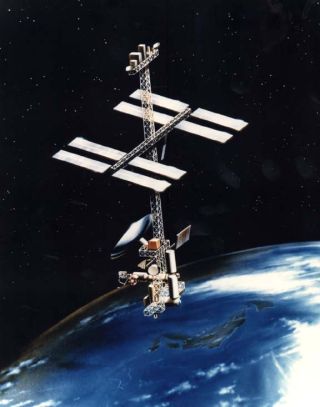 This is an artist's conception of the proposed "Power Tower" space station configuration, shown with the Japanese Experiment Module attached.
(Image: © NASA.)

In this historical photo from the U.S. space agency, an artist's conception of the proposed "Power Tower" space station configuration from June of 1985, is shown with the Japanese Experiment Module attached. This model and several others were examined before deciding on the Space Station Freedom structure that was later abandoned in favor of the International Space Station.