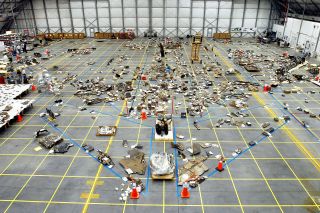 Pieces of Columbia space shuttle debris are seen stored in a hangar at NASA's Kennedy Space Center in Florida during accident investigation in 2003. More than 82,000 pieces of debris from the Feb. 1, 2003 shuttle disaster, which killed seven astronauts, were recovered. In all, 84,800 pounds, or 38 percent of the total dry weight of Columbia, was recovered. Imaged released May 15, 2003.
(Image: © NASA)

It's been 10 years since the Columbia space shuttle accident, and spaceflight safety has come a long way — but has it come far enough? Experts say traveling to space is still a risky business, and while future accidents may not be inevitable, they aren't quite preventable, either.

On Feb. 1, 2003, seven astronauts lost their lives when NASA's space shuttle Columbia broke up during re-entry through Earth's atmosphere. The shuttle was wrapping up a 16-day science mission to orbit that had seemed to go off without a hitch. Yet damage to the orbiter's wing, including its sensitive heat shield, incurred during launch prevented the vehicle from making it safely to the ground.

Just as in the aftermath of the devastating Apollo 1 ground fire in 1967 and the shuttle Challenger launch accident in 1986, a thorough investigation followed the disaster. The Columbia Accident Investigation Board (CAIB) turned up numerous holes in NASA's safety protocol, as well as flaws in the shuttle design, which were corrected before any more shuttles flew.

Those changes allowed NASA to continue flying space shuttles through 2011 without mishap, and have even made a stark imprint on spacecraft design going forward.

Yet for all the gains, experts say sending people to space is still fundamentally dangerous. [Photos: The Columbia Space Shuttle Tragedy]

"We always hope and work and strive to avoid [an accident]," said Julie Kramer White, chief engineer for NASA's next-generation space capsule, Orion. "But you're talking about a very high-energy event. All these liquid and solid propellants are very high-energy, and managing all that energy during ascent and landing is not going to change. That's the physics of getting off the surface of Earth and re-entering through the atmosphere — we're not going to make that go away."

However, accidents like the one that befell Columbia have had an indelible effect on the way NASA goes about trying to keep its astronauts safe.

"We have a poster here in our conference room every day we sit in, with [the Columbia crew] on it, with a sign that says, 'Never forget,' and that's kind of our goal," said Dustin Gohmert, NASA crew survival engineering team lead at Johnson Space Center in Houston. Gohmert was part of the team that helped the Columbia crew suit up and prepare on launch day.

"It's especially heartfelt for those of us who worked with the crew," Gohmert told SPACE.com.

And the insights gained the hard way, through understanding what happened to Columbia and the other destroyed spacecraft, have made flying to space safer than it used to be, experts say.

"If we do assume [accidents] are preventable, we're fooling ourselves," Gohmert said. "And if we always have in our mind that the next accident is out there, and we're ever vigilant, we do our best to prevent it. I would be very cautious to say that accidents are a thing of the past. But by staying vigilant, we significantly reduce the likelihood of them, and should they happen, we're more prepared for them."

The need for safer, more reliable spaceflight is especially felt by the emerging commercial space industry, which aims to launch people on routine trips to orbit in the near future.

"Having strapped into a rocket before, I can tell you that I have personal and emotional reasons of why I want to build a vehicle that is safer than anything that's ever flown before by an order of magnitude," Garrett Reisma[s1] n, a former NASA astronaut who is now the Commercial Crew project manager for Space Exploration Technologies Corp. (SpaceX), said in a NASA statement. SpaceX is one of a handful of companies that are developing private vehicles to haul cargo and crew to low-Earth orbit.

One of the main ways the risk of spaceflight can be reduced is through developments in materials science, White said. Newer materials may prove stronger and better at protecting space vehicles from the rigors of launch and re-entry than existing materials can do. [Columbia Shuttle Disaster Explained (Infographic)]

"People are always researching high-energy materials, and those areas are continuing to advance, so I do think someday the materials and engineering will advance to the point where [space travel] is more like commercial airplane travel," she said.

Ultimately, many say that the benefits of space exploration must always be weighed against the risks.

"It's going to remain expensive, difficult, and dangerous," said Doug Brown, brother of astronaut David Brown, who died in the Columbia shuttle accident.

Brown said he personally feels the risks are reduced enough for travel to low-Earth orbit to justify sending humans there, but that the dangers involved in traveling farther out, to say an asteroid, the moon or Mars, are still too high to justify flying people on such journeys yet.

"That doesn't mean quit," Brown said, but he maintained that NASA must make space travel safer before it puts people in harm's way on missions beyond Earth orbit.